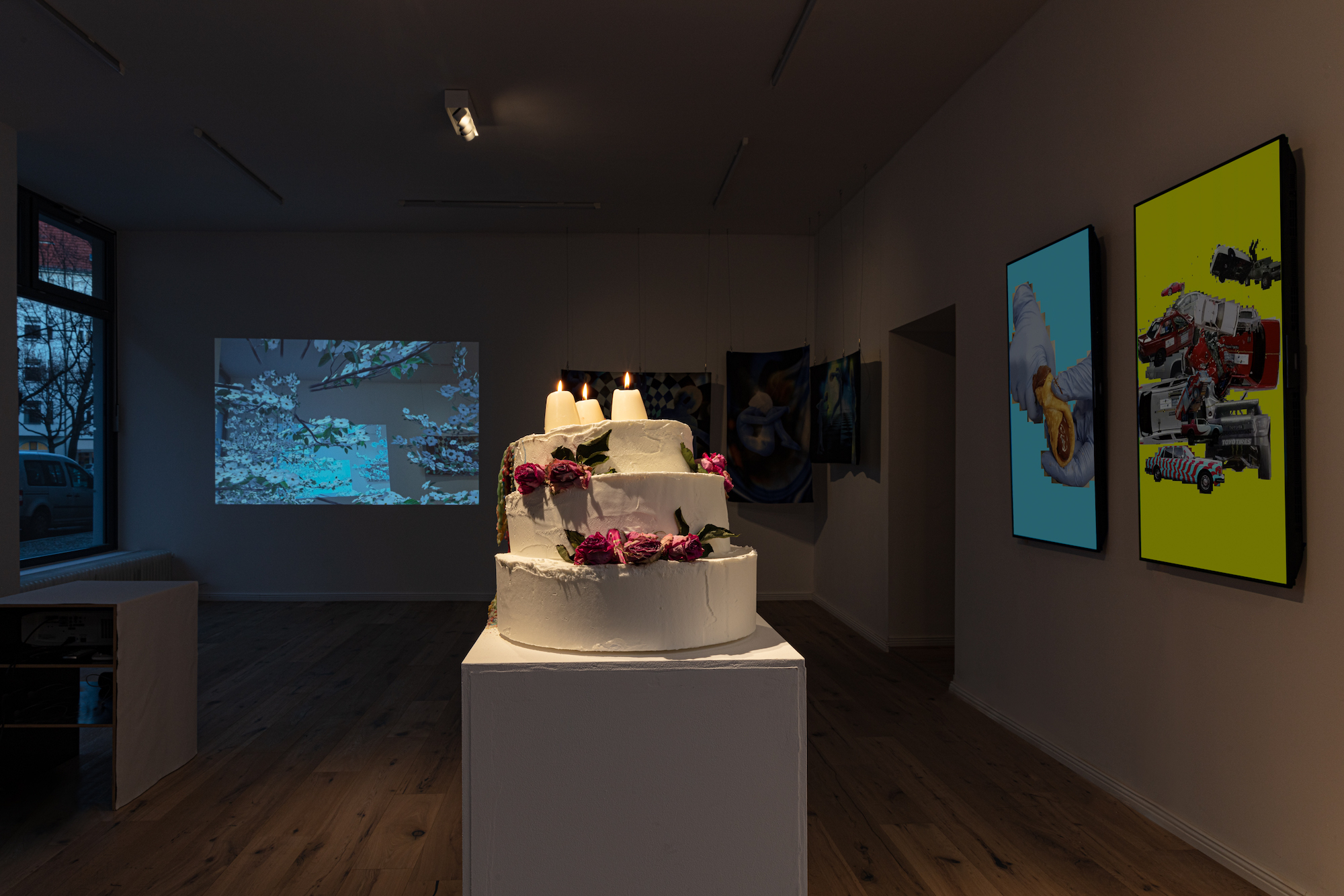 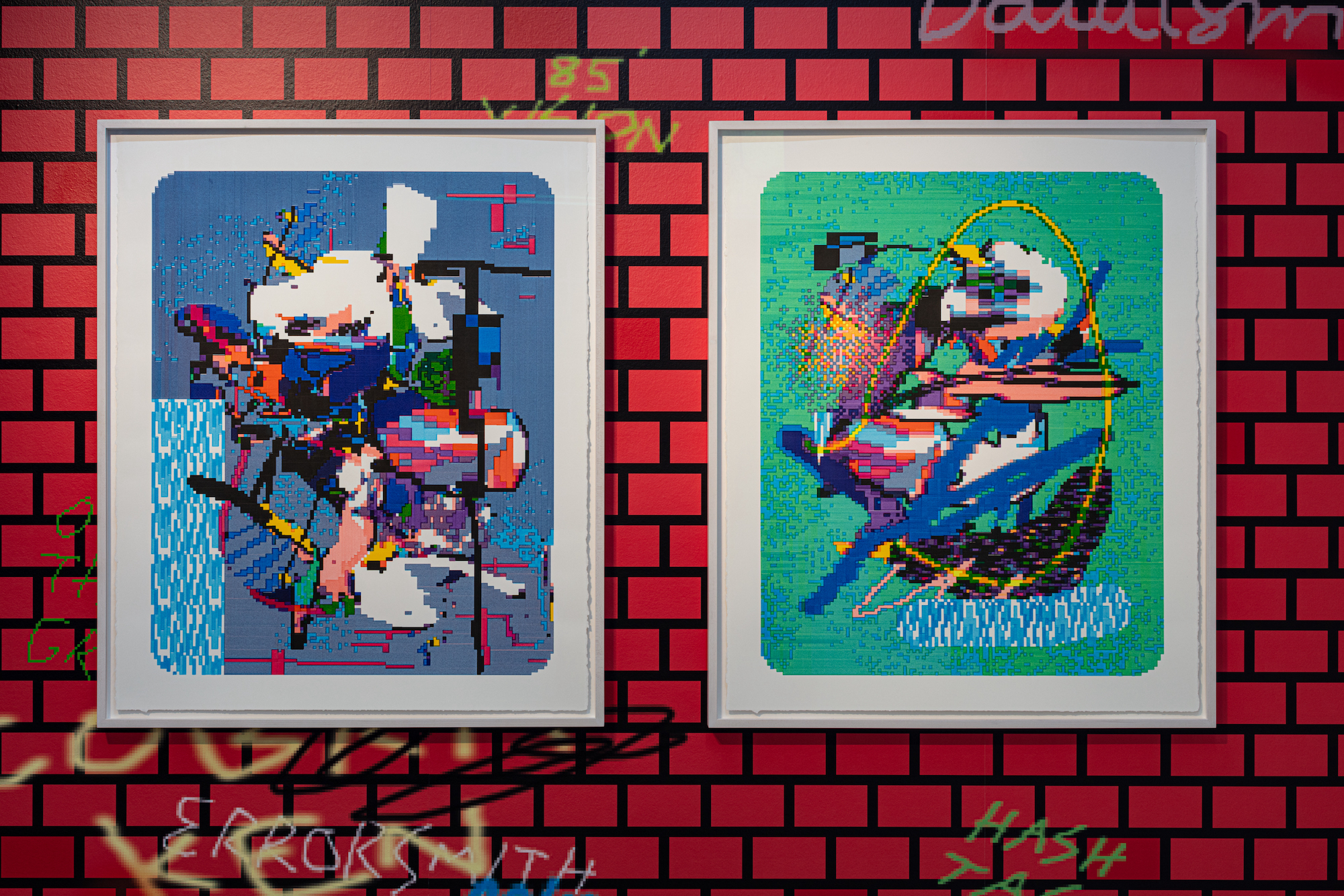 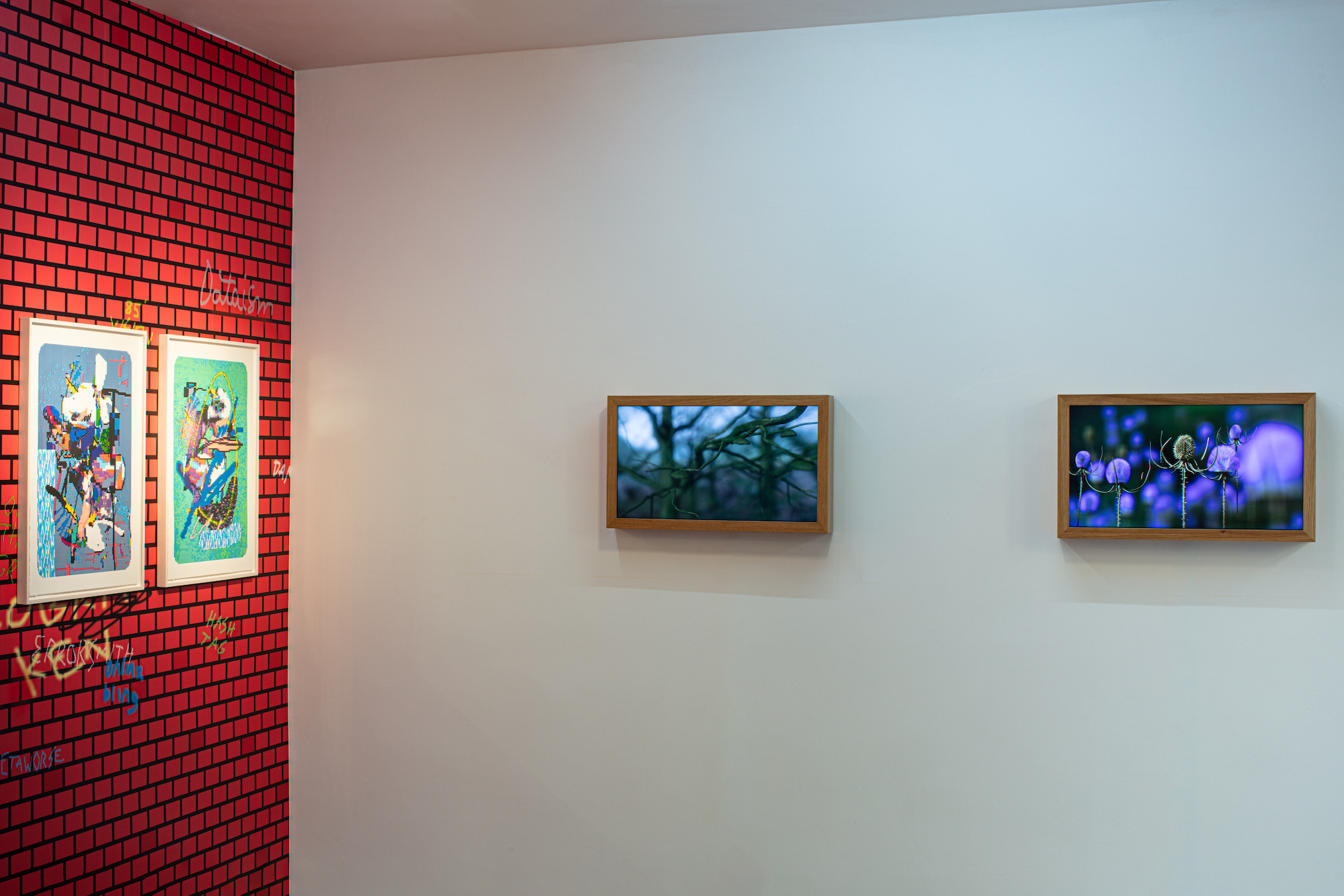 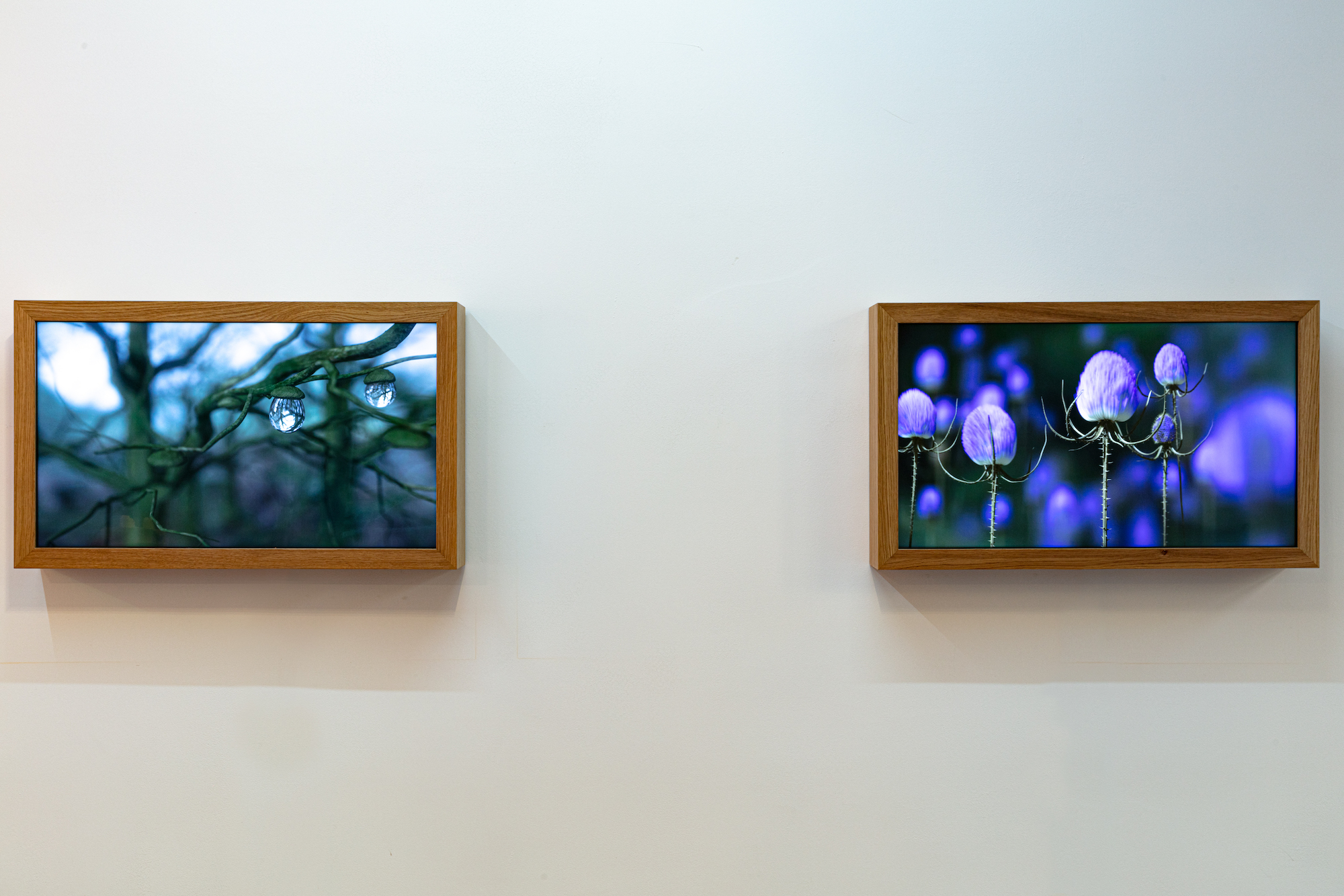 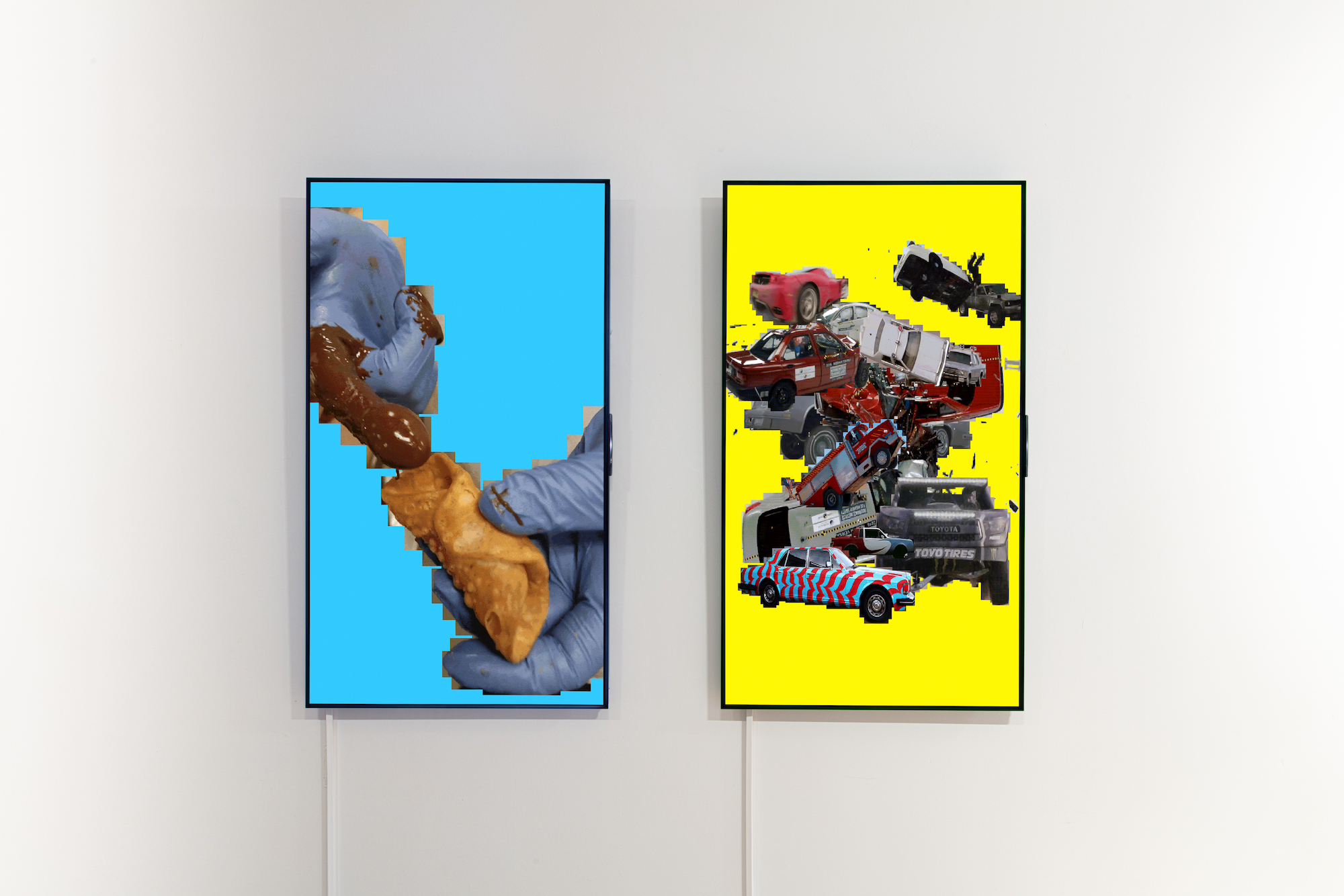 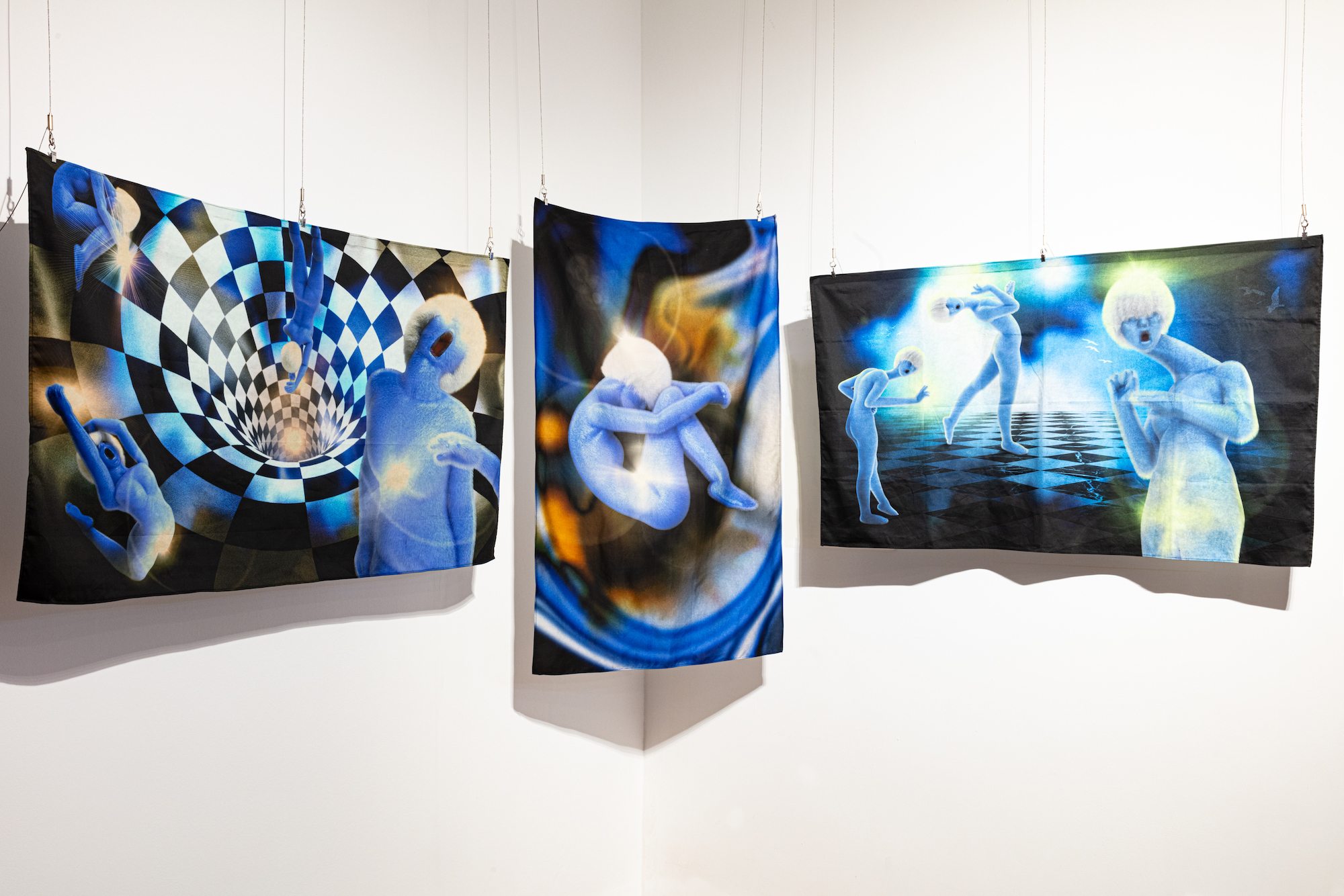 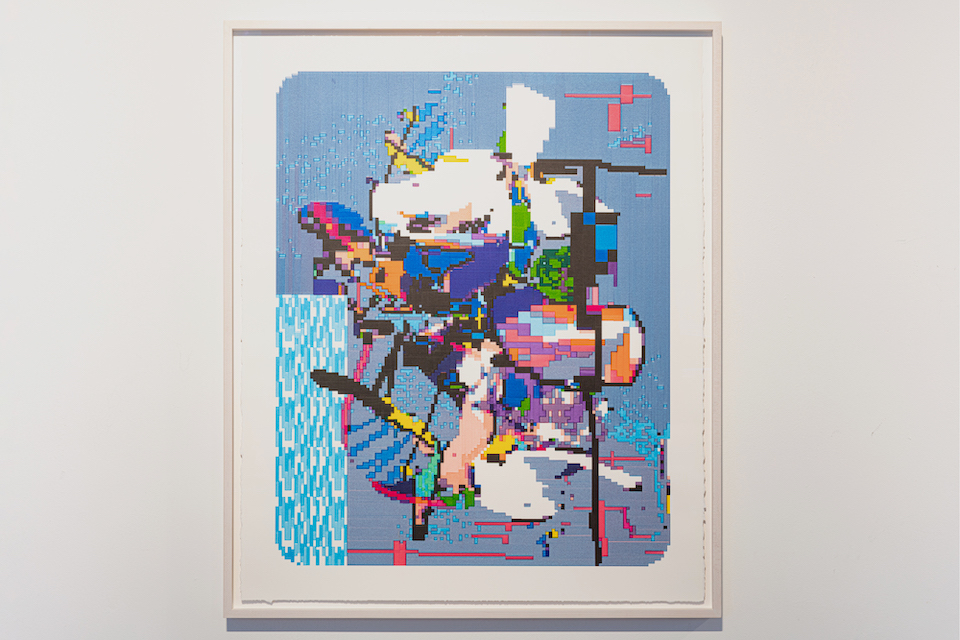 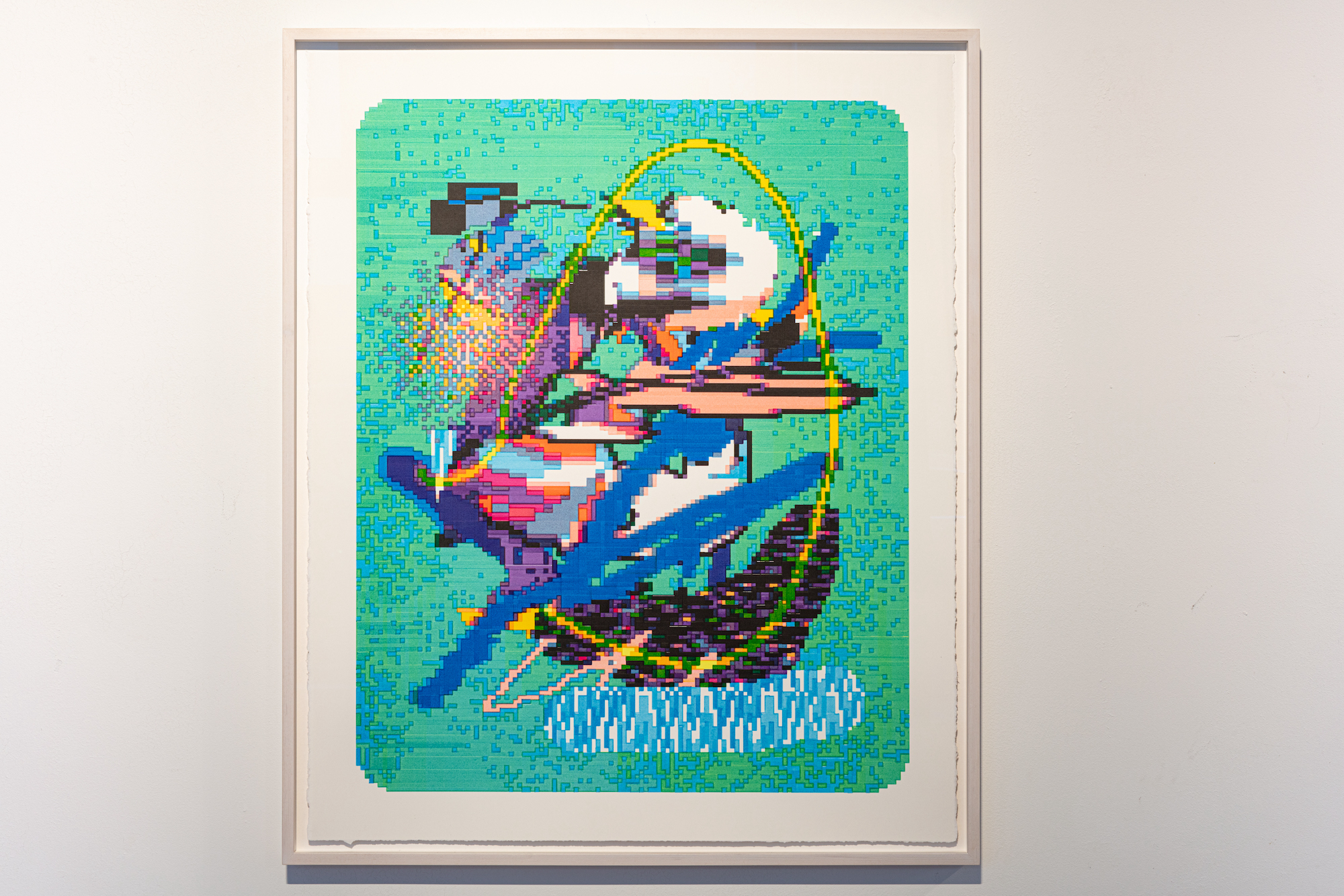 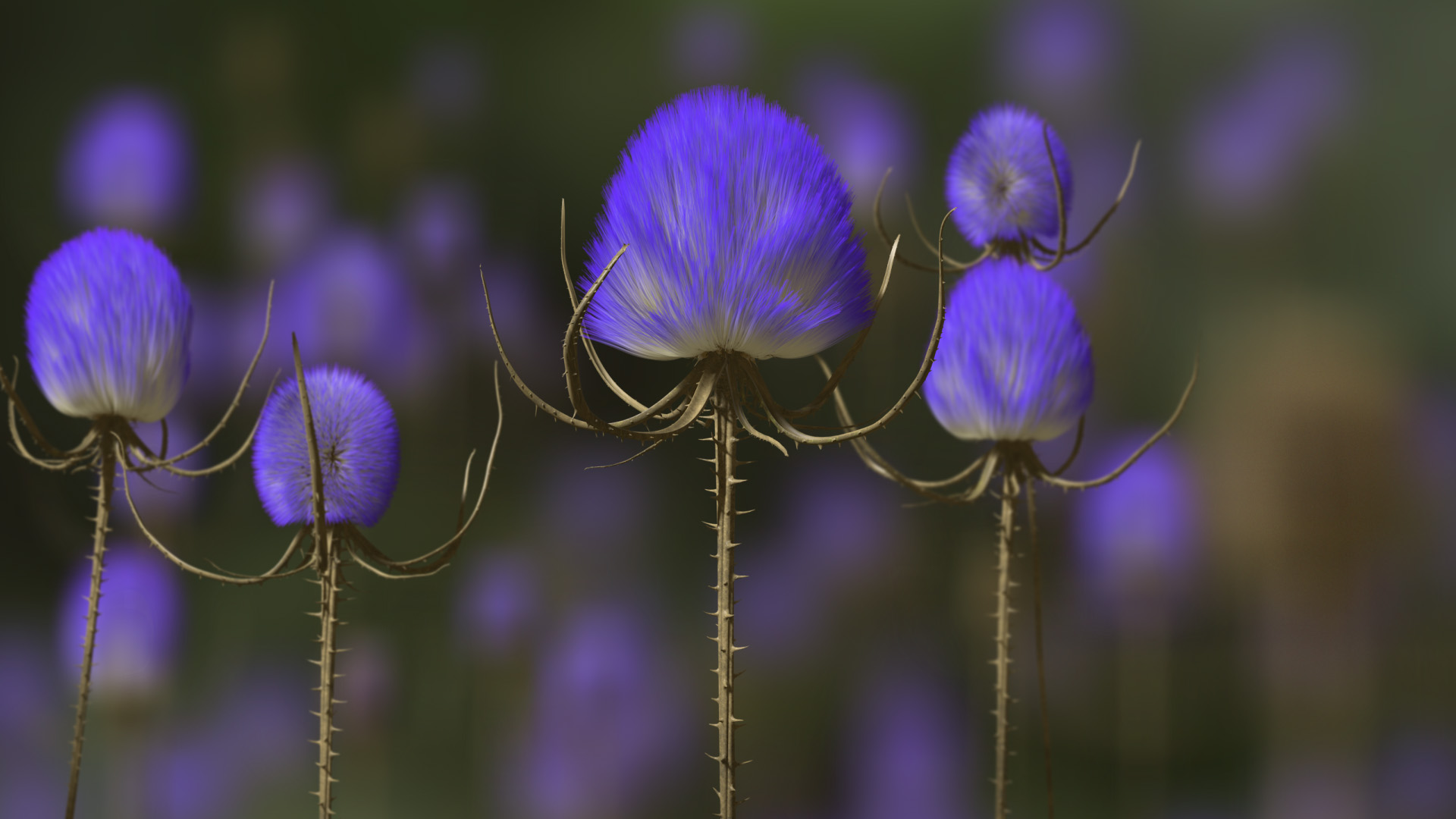 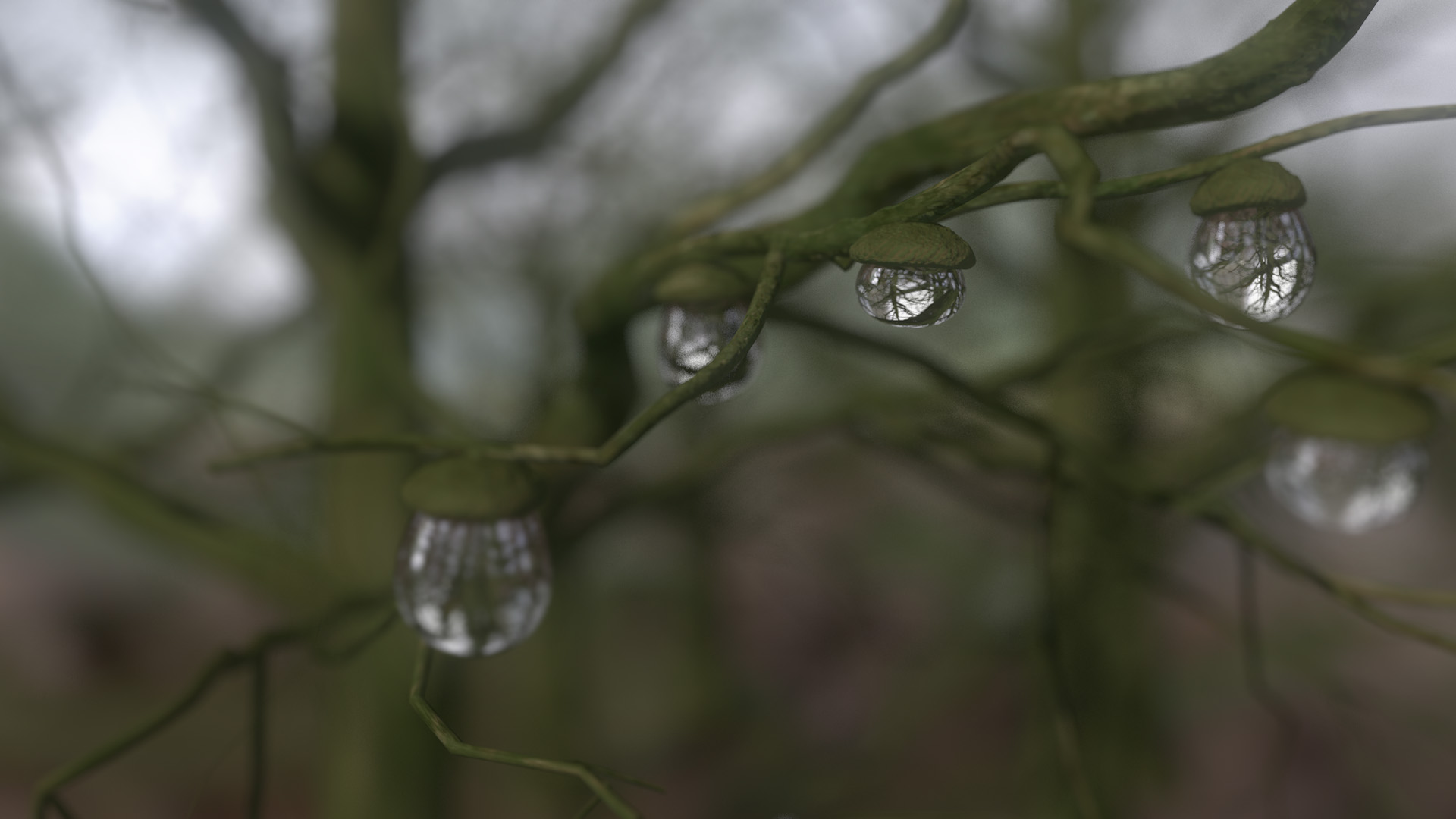 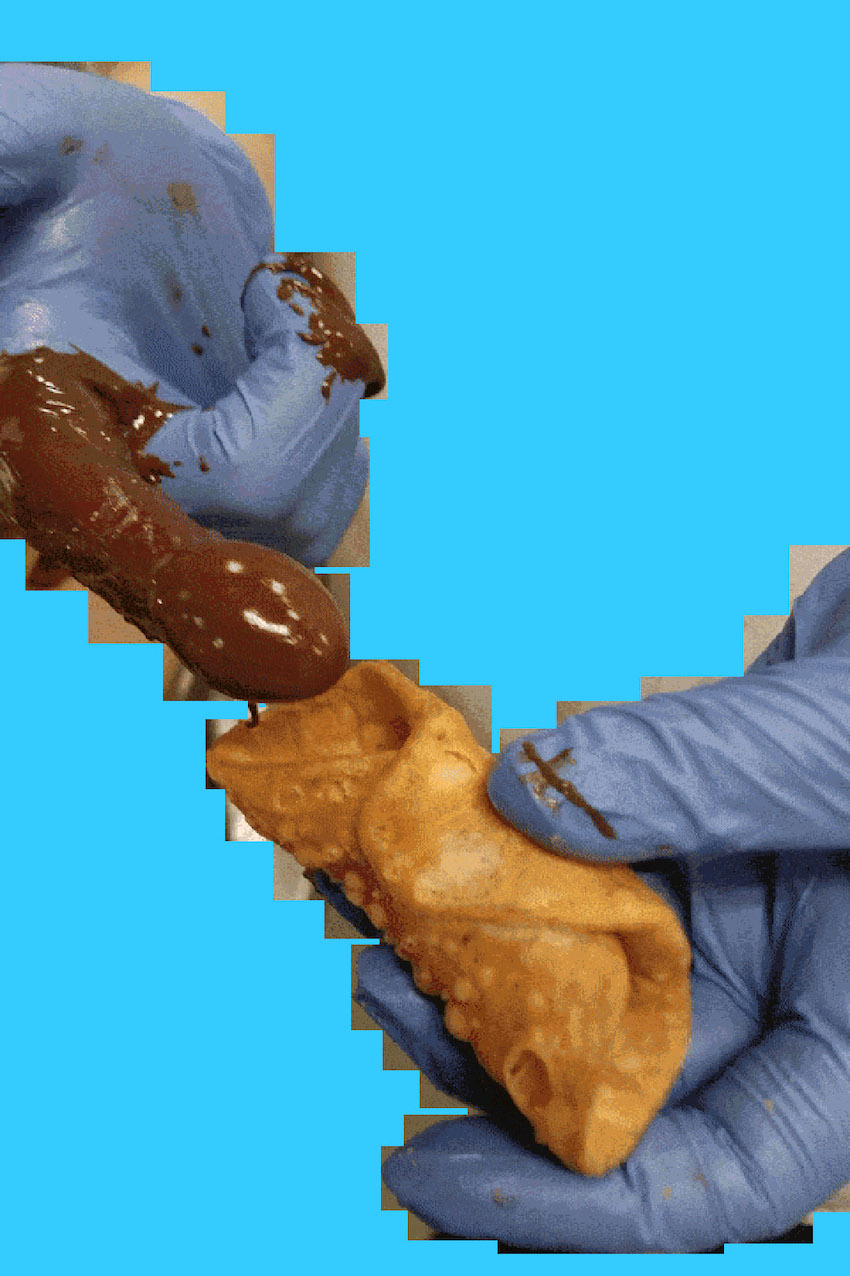 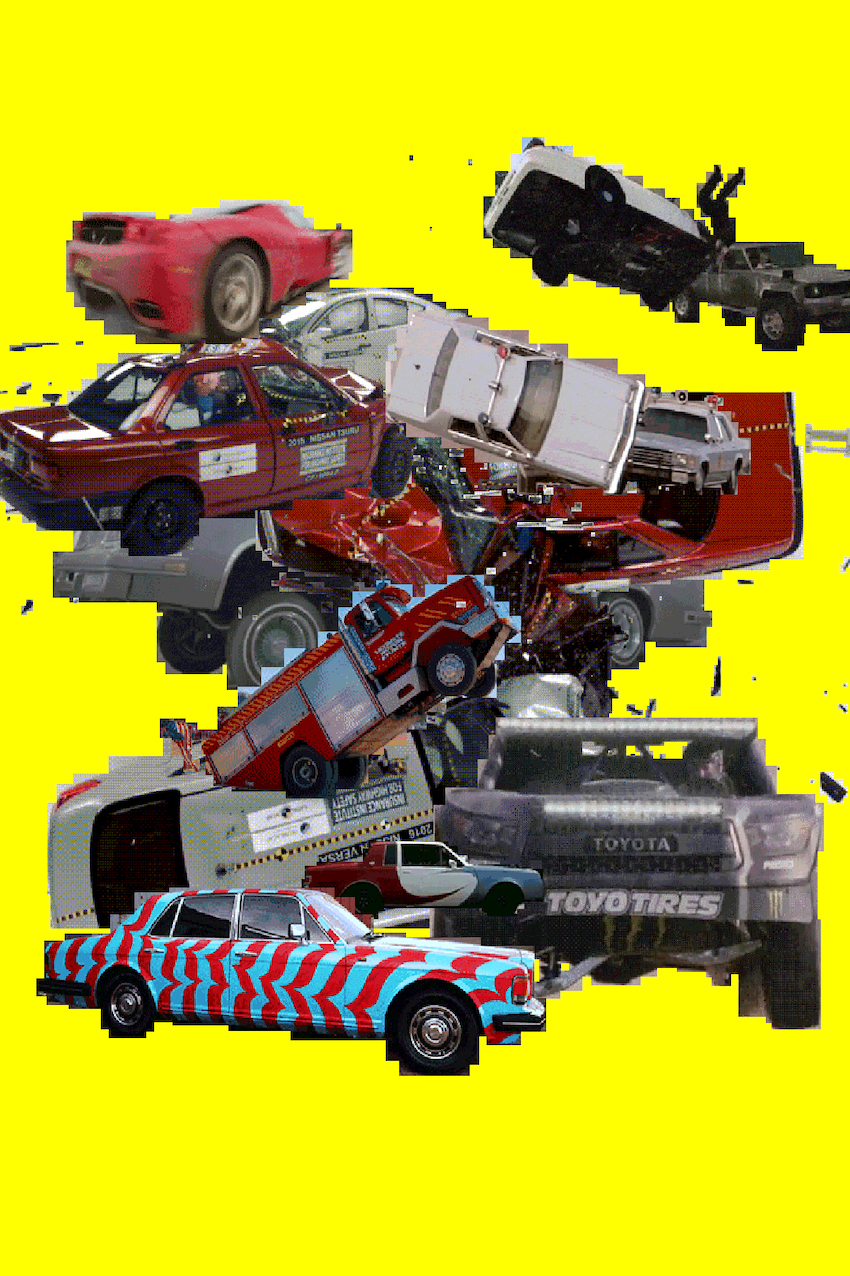 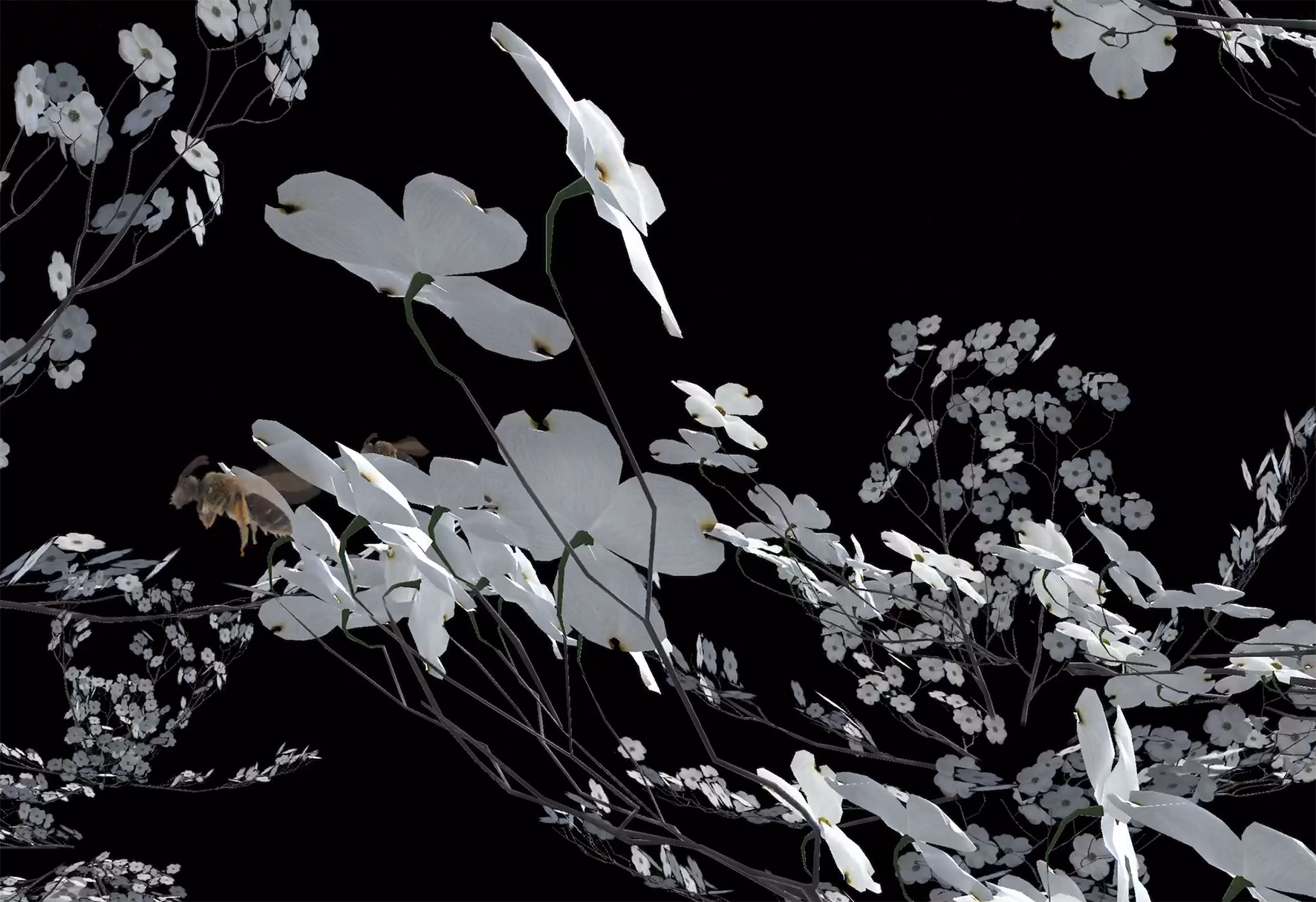 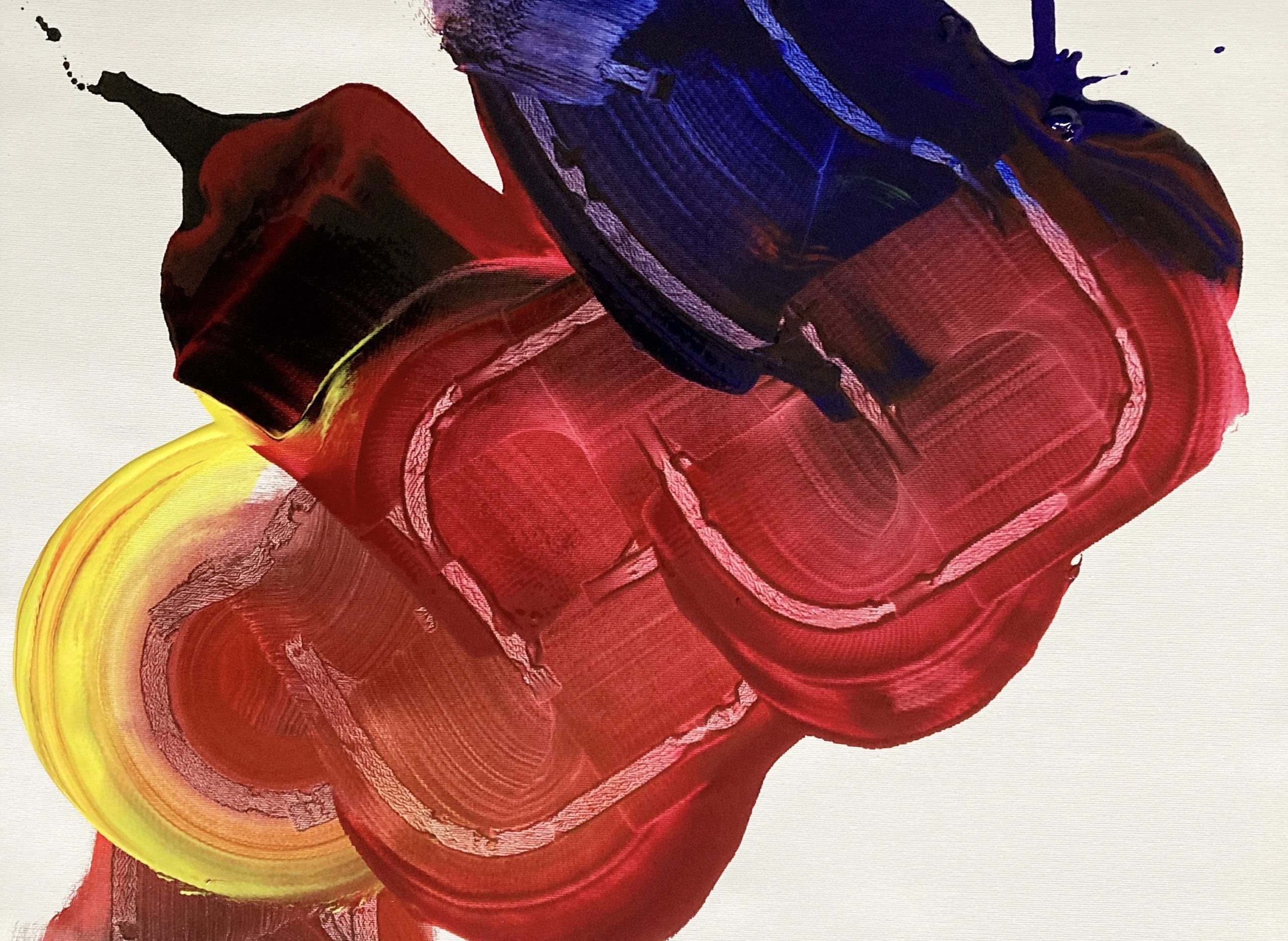 Lock your screens and leave your home office. DAM projects is celebrating the opening of the gallery’s new location in Berlin-Charlottenburg.

While the title of the exhibition might suggest you end your screen activities, it is anything but an invitation to turn away from the digital. Arno Beck, Eelco Brand, Lorna Mills, Tabitha Swanson, Tamiko Thiel and /p & Addie Wagenknecht use a variety of strategies and media to raise awareness of digital culture, technology, and their social implications. Their works exemplify the diversity of what can be concealed behind the elastic catch-all term digital art.

Addie Wagenknecht conceals the abysmal in opulence. Put some flowers and make-up on it – it’ll be all right, won’t it? Wagenknecht lets the eternal girlish fantasy of a dream wedding and lifelong love collapse in the form of a cake. Taking cues from Pinterest inspiration shots seen, saved and shared millions of times, she, like so many before her, transfers digtial-fed wishful thinking into physical reality. But in “Waiting for Mister Right,” the party is long over. Blossoms wither, candle wax smears the immaculate projection surface.

Wagenknecht makes gender injustice visible. Her beauty paintings put the woman on canvas: abstract, colorful, and as a questionable mix of cosmetics, optimization pills, intoxicants, and prescription drugs. “Self Portrait”, for example, contains a bit of CBD, some melatonin, and Chanel lipstick – applied by a specially programmed vacuum cleaner robot.

For the gif series “There are no girls on the internet,” Wagenknecht clicked through hundreds of video chats to find out whether women in anonymous online communities are really as absent as the titular phrase suggests. In her search for a female-read counterpart, Wagenknecht encounters chewing men, winking men, men with neck pillows or men in towels. After five days of Chatroulette & Co. she has taken stock: She is a woman, she moves around on the Internet, but women do not become visible on the Internet.

Reality also becomes an obstacle in Tabitha Swanson‘s work. In her series of digitally composed mixed-media works, fluffy-naked bodies with dead eyes and wide-open mouths writhe on the precipice, in shorelessness, in indefinable nothingness. “ཞɛąƖıɬყ ıʂ ąŋ ơცʂɬąƈƖɛ,” “𝑅𝑜𝓊𝓃𝒹 𝒶𝓃𝒹 𝓇𝑜𝓊𝓃𝒹 𝒶𝓃𝒹 𝒹𝑜𝓌𝓃 𝒷𝑒𝓁𝑜𝓌,” and “ʂρσɳƚαɳҽσυʂ ԋυɱαɳ ƈσɱႦυʂƚισɳ” were created in 2021 Lockdown. At a time when the reality of all our lives had increasingly shifted from the analog to the digital, Swanson, who until then had worked almost exclusively digitally, decided to show her art off-screen.

Spontaneaous human combustion, the unprovoked spontaneous combustion of the human body, is a pseudo-scientific myth, but here it functions as an image for the mute, screaming despair in the face of a confining, endless state of limbo. Printed on discreetly transparent fabric, hung in a room flooded with light, somber emotions can be experienced in ambivalence. What seems hopeless from up close is put into perspective as something that can be shaped from a distance.

“Uno depressi por favor”? Arno Beck certainly has the right cup ready. The wordplay is the not-so-secret talent of the artist, whose hobbyhorse is actually the analog implementation of digital image worlds by means of machines. Beck’s works convey childlike feelings of tenderness under the spell of the family PC. He calls this “nowstalgia,” retro culture as a zeitgeist phenomenon, but he doesn’t see himself and his artistic practice entrenched in it.

Beck’s computer-generated plotter drawings “Mindcraft” and “Vortex” are reminiscent of pixelated early Microsoft Paint excesses, but they are anything but realied in an uncoordinated, spontaneous analog manner. Beck incorporates the functioning of the computer into his drawing process. He calls it painting in a roundabout way. He cleverly sells obsession as disciplined play, thus guaranteeing a joyful experience of technical and technical precision.

Car crashes and penetration – the Internet is full of them and one could dismiss the corresponding clips as superfluous net filth. But Lorna Mills passionately dives into the flood of images of seemingly trivial things, collecting absurdities like trophies on dubious platforms. She decontextualizes the material and collages grotesque mini-spectacles from it, mechanically twitching in a loop.

As in Beck’s work, pixels play a central role as building blocks of digital images. She creates gifs that are familiar in format but read differently in design than the widespread reaction snippets that have long been easy to send via the Messenger search bar. Mill’s works are ambiguous, captivating and disturbing in equal measure.

Disguised in the title as a vegetable-heavy pasta dish, she serves up pornography in a sea of flowers with “Linguine Primavera”. What the artist herself finds irritating is not the bouncing scrotum, but the tiny feet in the picture. Mill’s works convey such pure pleasure in supposed indecency that it is difficult to take offense at the pictures. In “Cannoli” Sicilian pastries are filled. Those who associate otherwise should remain ashamed.

In comparison, Eelco Brand‘s 3D animations seem almost meditative. He creates experiences of nature on the computer that can only be processed by pausing. Brand sets a rhythm of insistent deceleration when he lets thistles blossom and dew drops pearl from branches. Related to reality, grown from the artist’s imagination, his works seem comfortingly familiar one moment, deceptive the next.

In Brand’s works, plants appear more than real, like hyperrealistic paintings in motion. The detail reveals a captivating elegance that makes one forget the illusion. Yet Brand’s imitated nature is not optimized, but can be understood as an invitation to understand the use of technology as changing perception.

In this spirit, Tamiko Thiel and /p create a future scenario that, unlike so many others, does not seem hopeless but absolutely desirable. Their augmented reality work “ReWildAR” covers urban structure with white flowering dogwood and milkweed. Dogwood mining bees and monarch butterflies take up residence in a wildflower meadow of stunning beauty.

Thiel and /p transform the immediate present of the here and now into what could be, indeed, must be: a symbiotic relationship of plants and animals as the necessary basis of biodiverse ecosystems, which are of sustainable importance for humanity in view of the climate crisis.

“ReWildAR” is a proposal for the restoration of a state as close to nature as possible where nature seems to have hardly any chance left. Via various screens, the abstract utopia becomes concretely conceivable – a vision towards which it is possible to work in a targeted manner.

The works of Arno Beck, Eelco Brand, Lorna Mills, Tabitha Swanson, Tamiko Thiel and /p, and Addie Wagenknecht provide clues as to how the digital has shaped our ways of thinking. For them, computers and coding are both a medium and a tool for describing the now, for critically confronting the current state without excluding beauty and play from consideration, and for making the potential of the future tangible by exploiting the technological possibilities of the present.

Press Command + Control + Q and see for yourself.