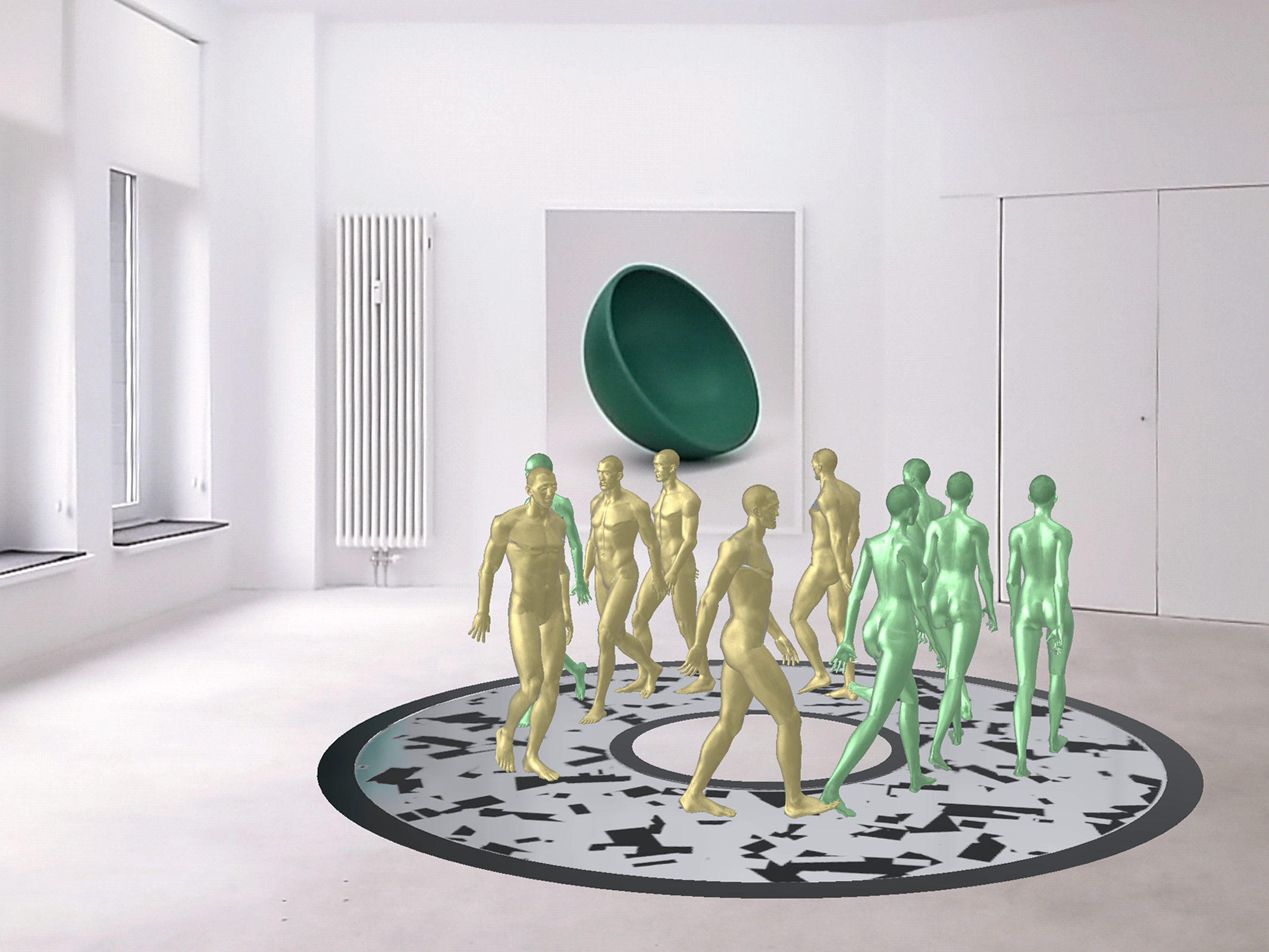 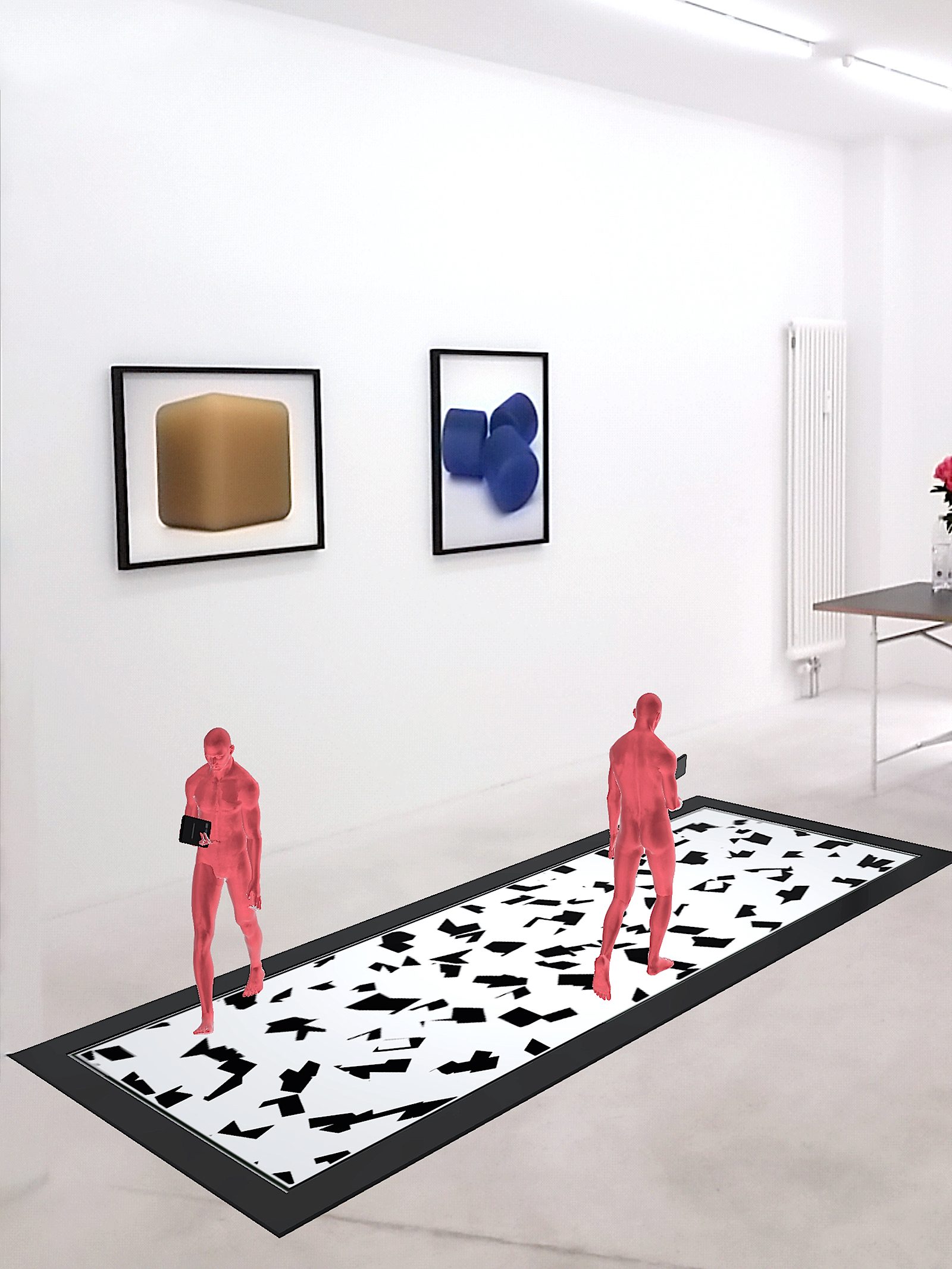 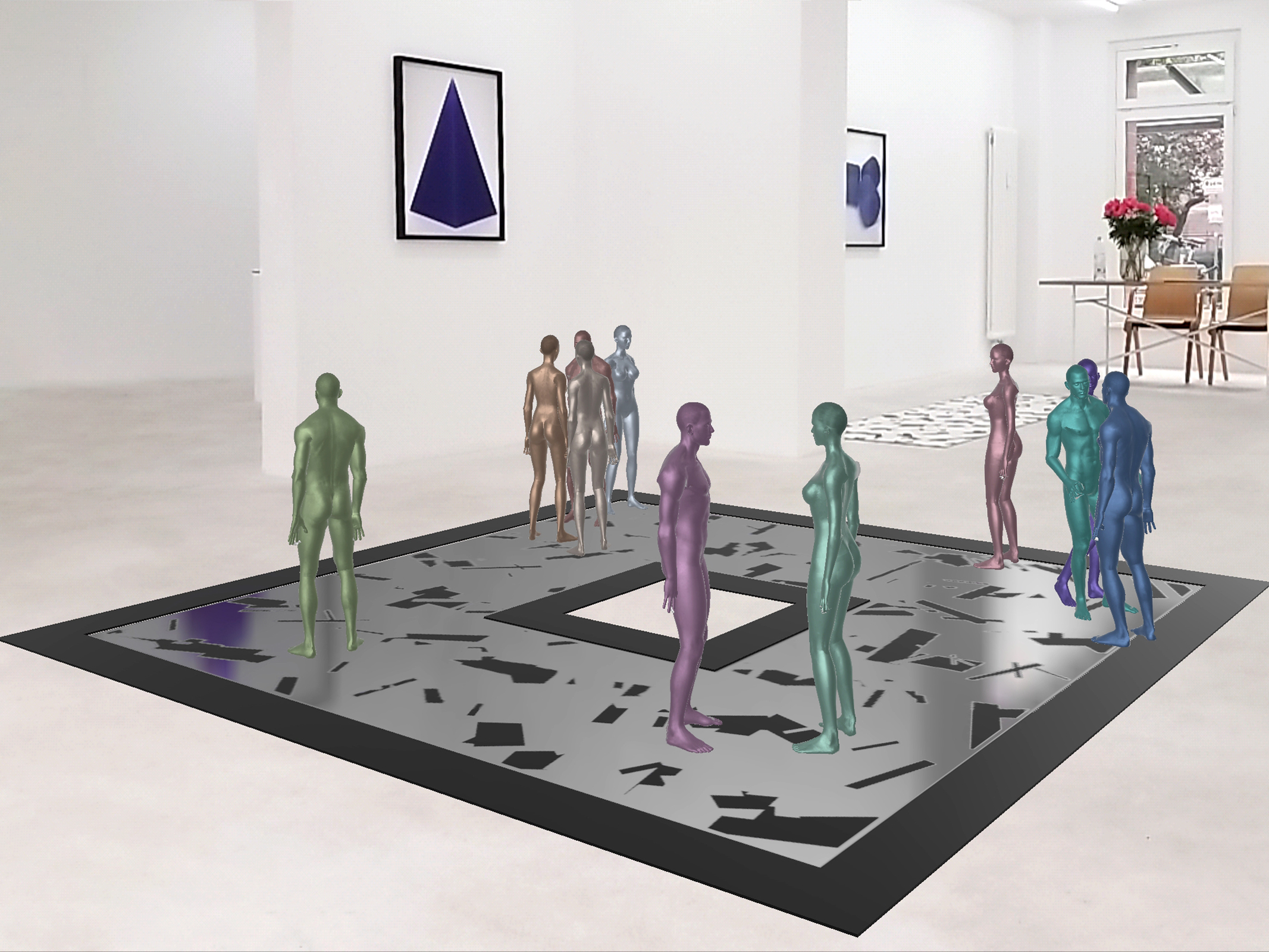 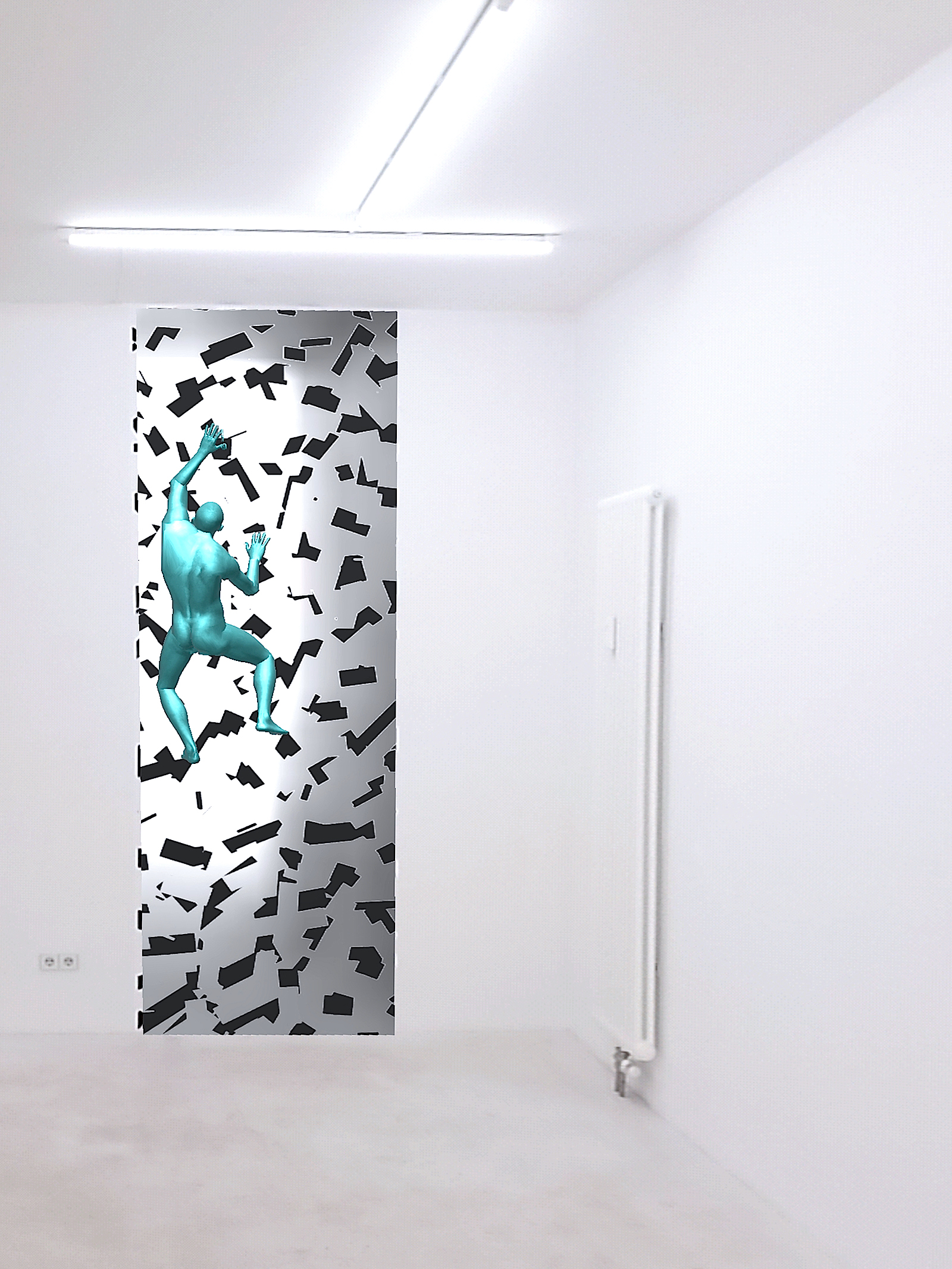 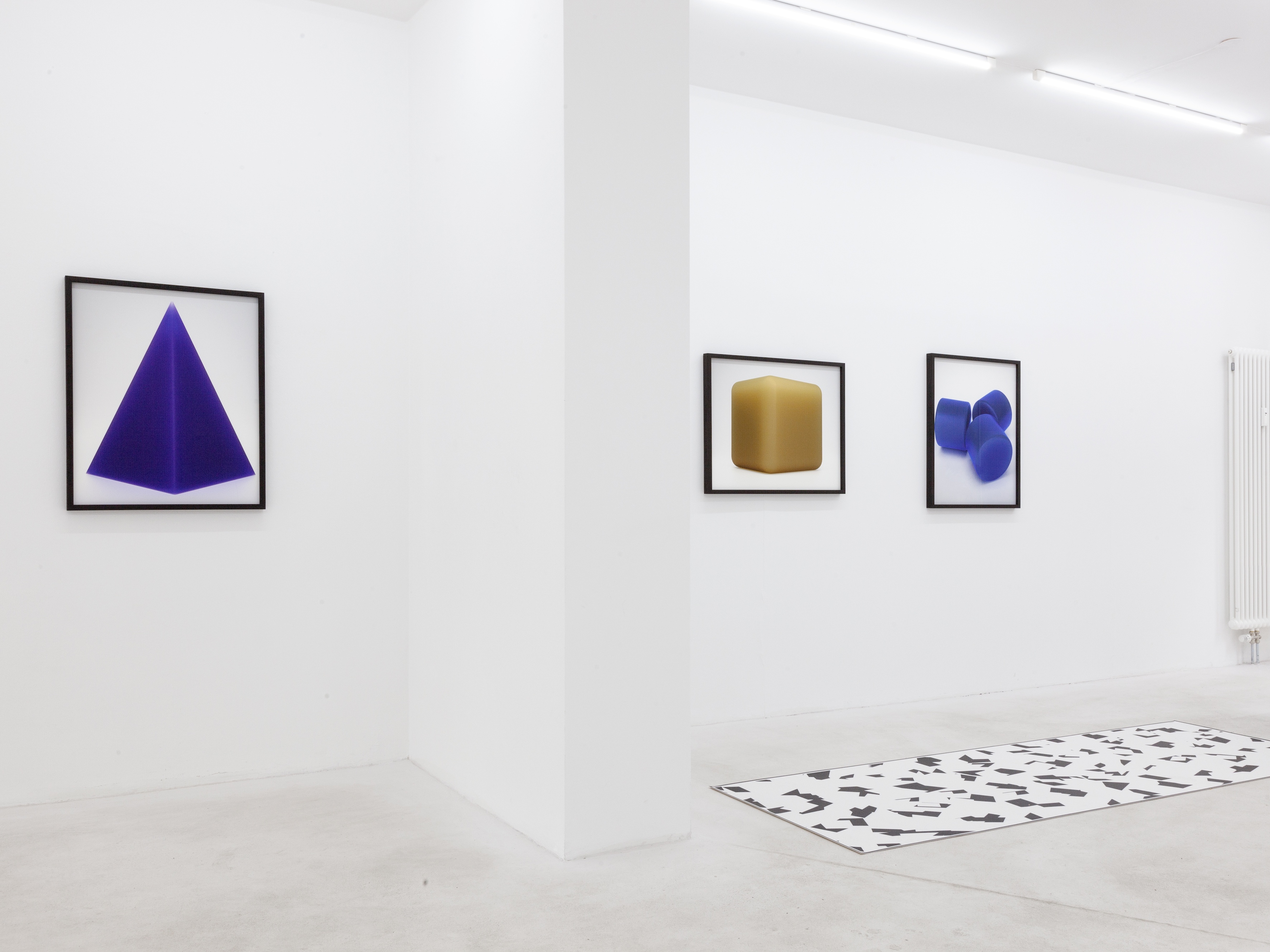 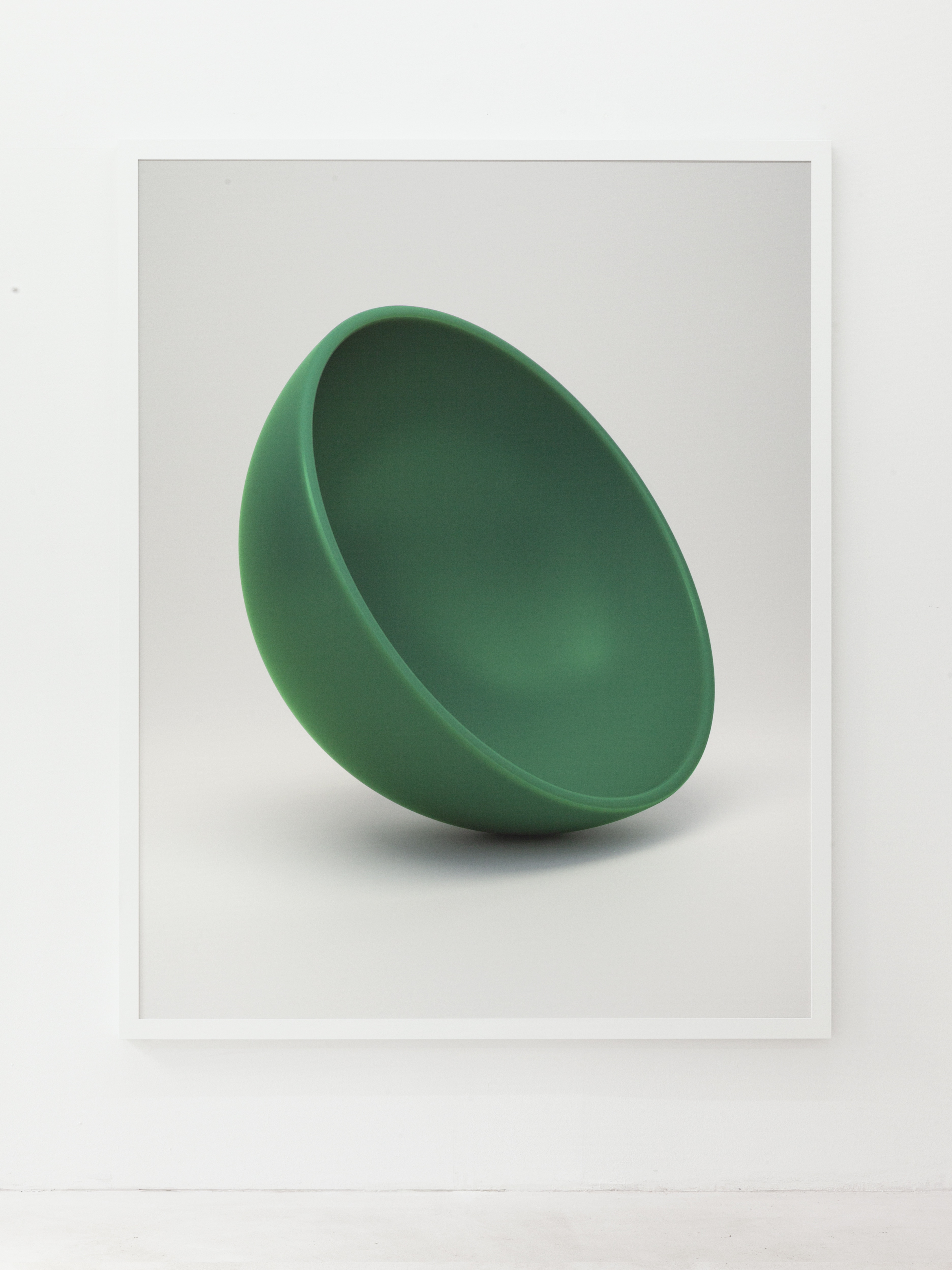 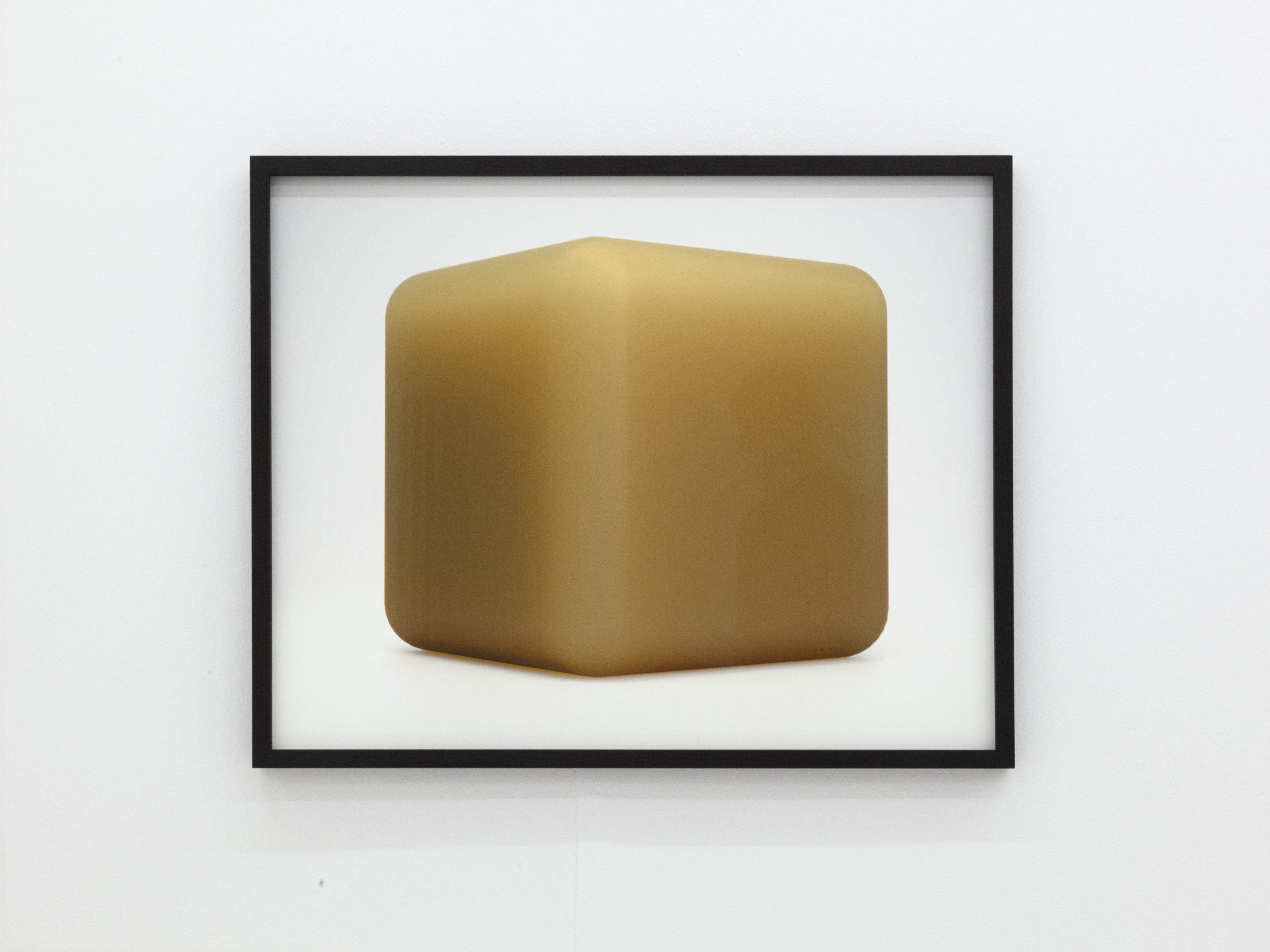 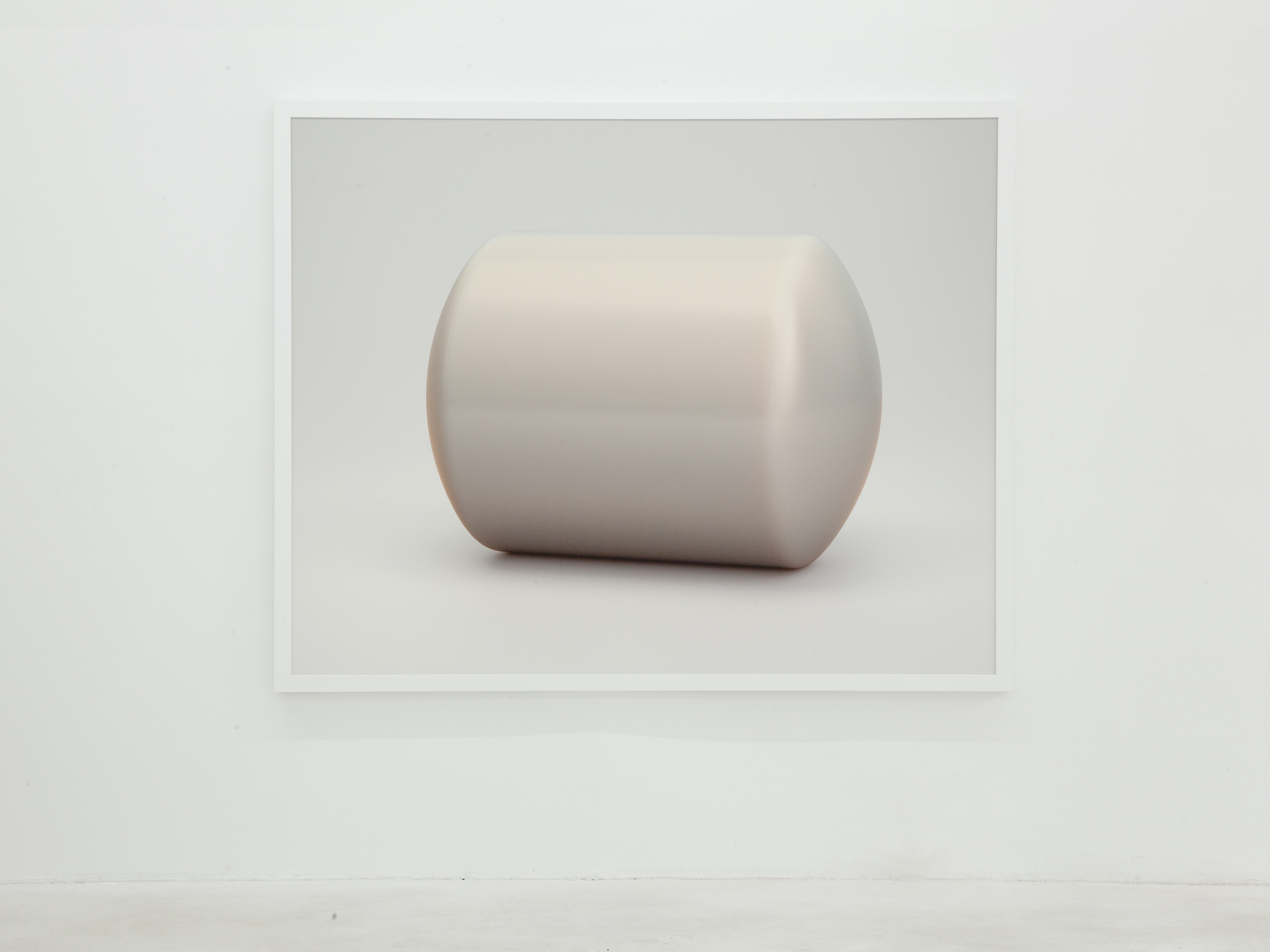 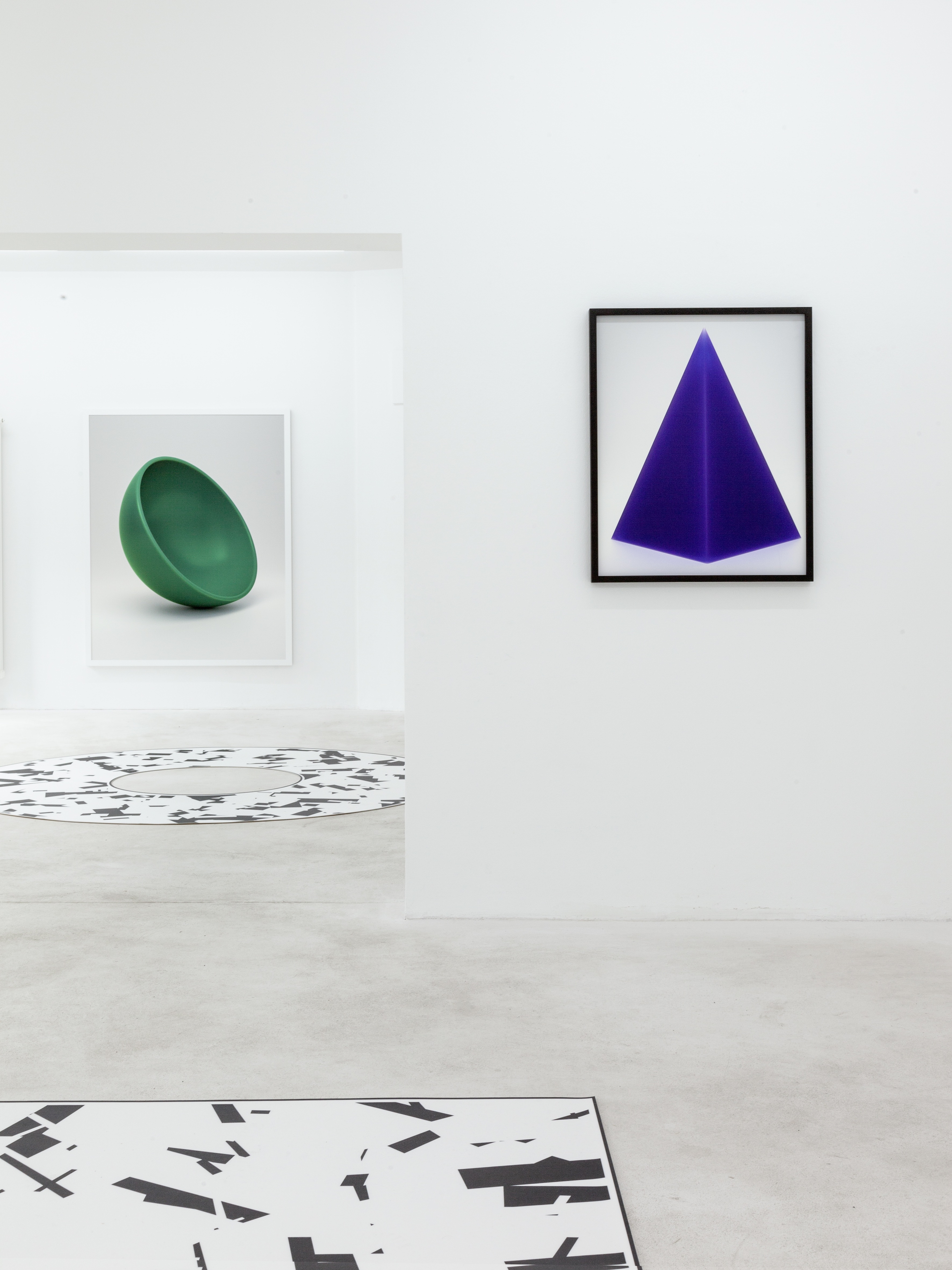 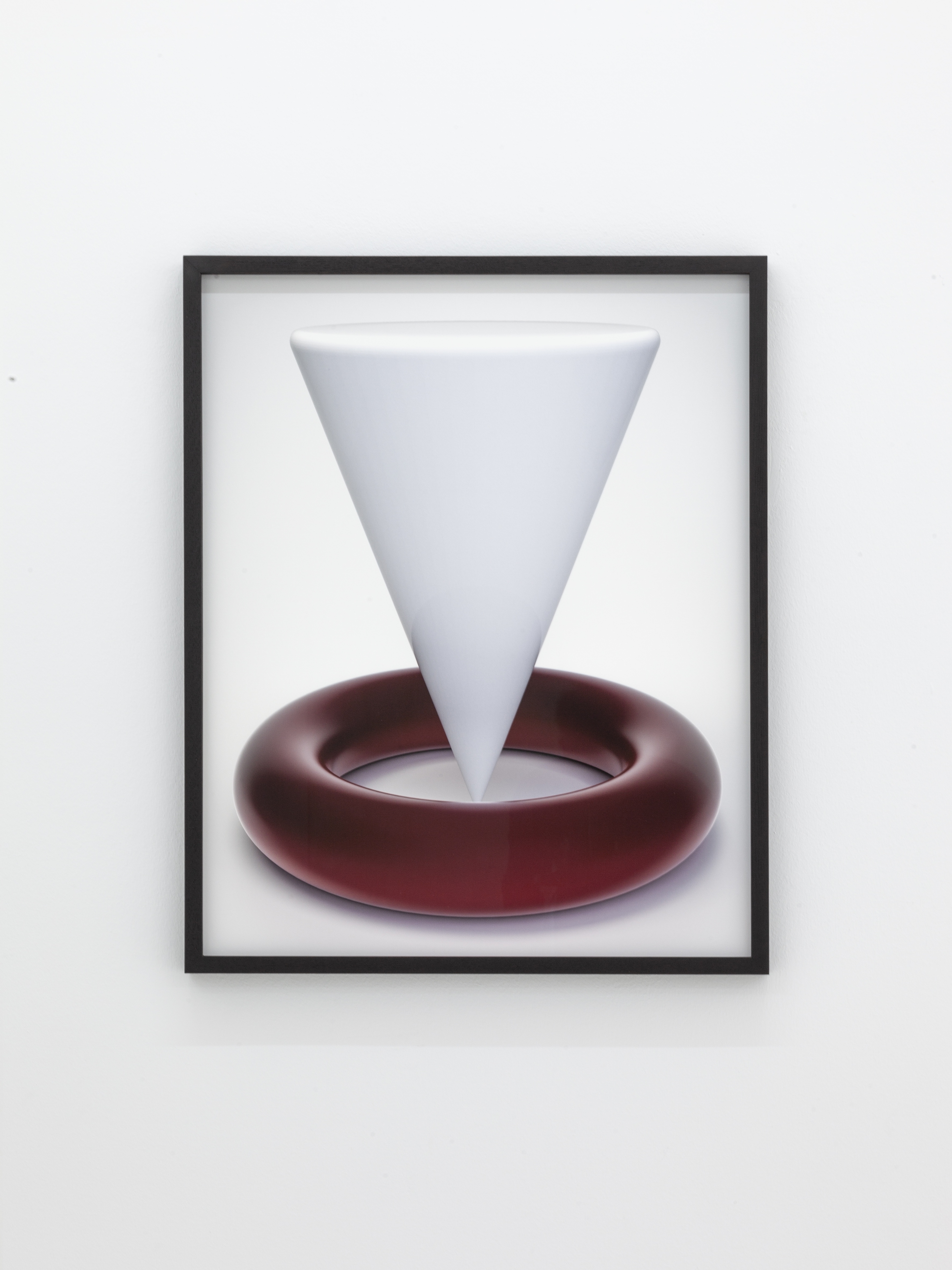 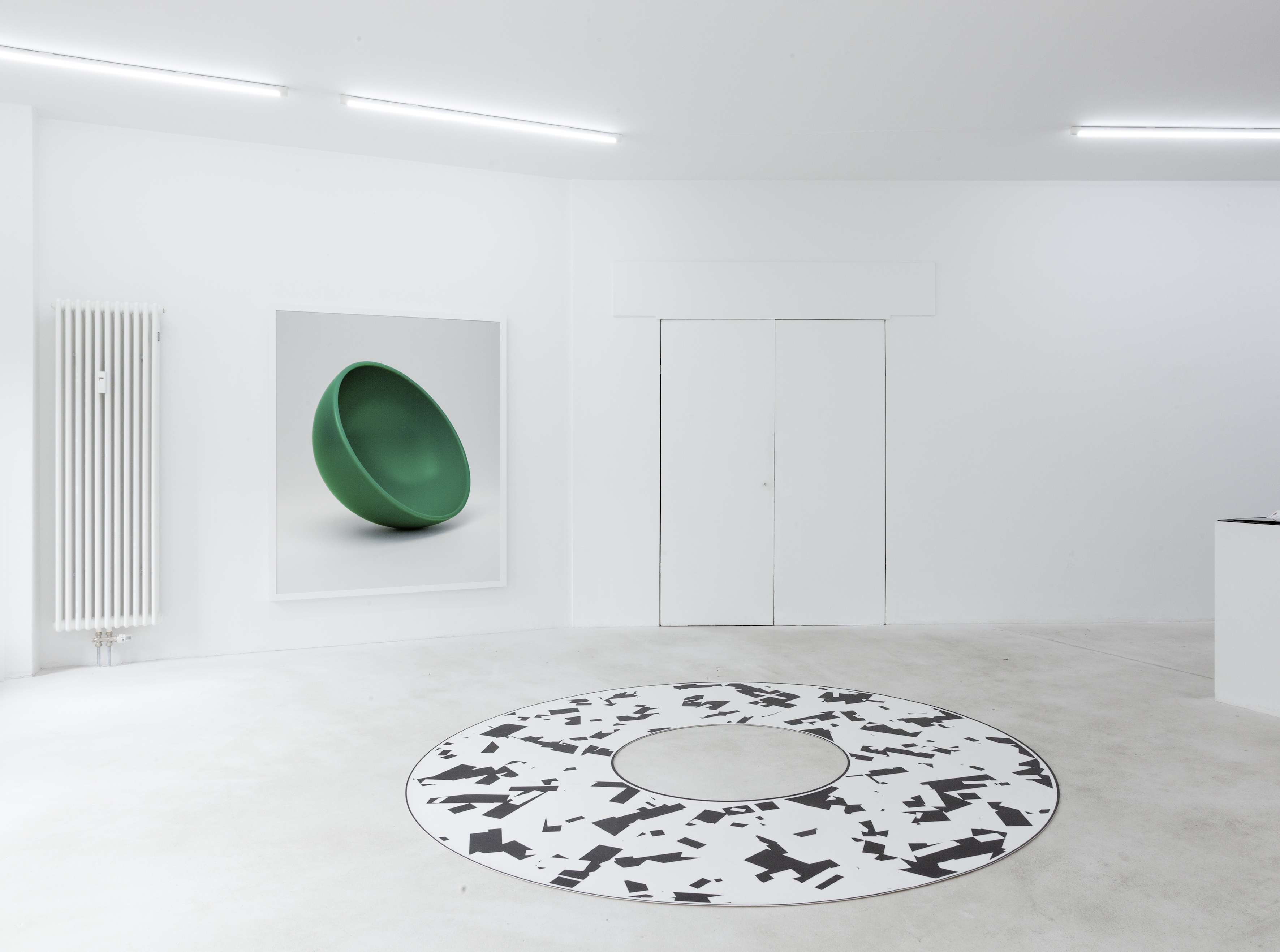 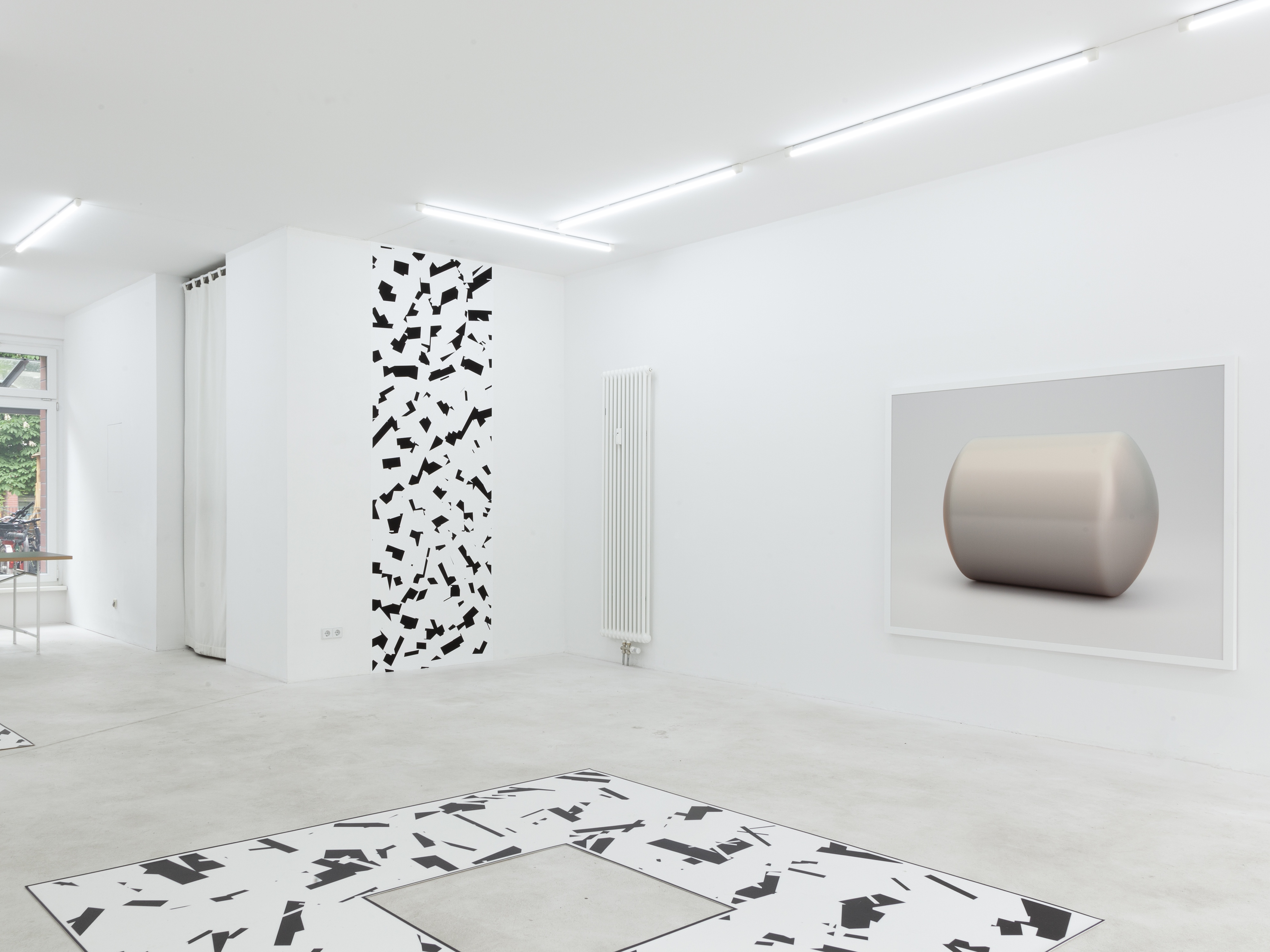 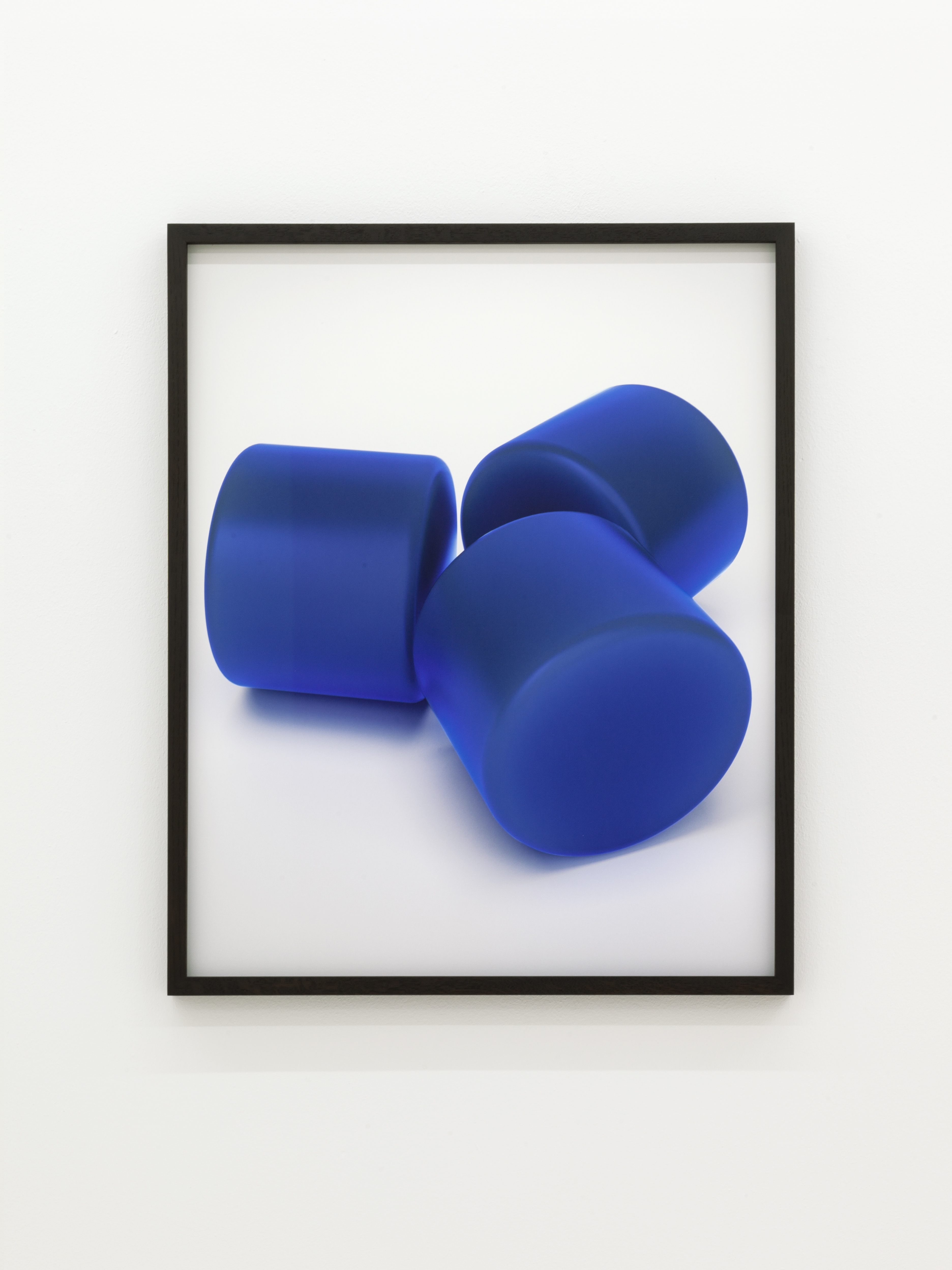 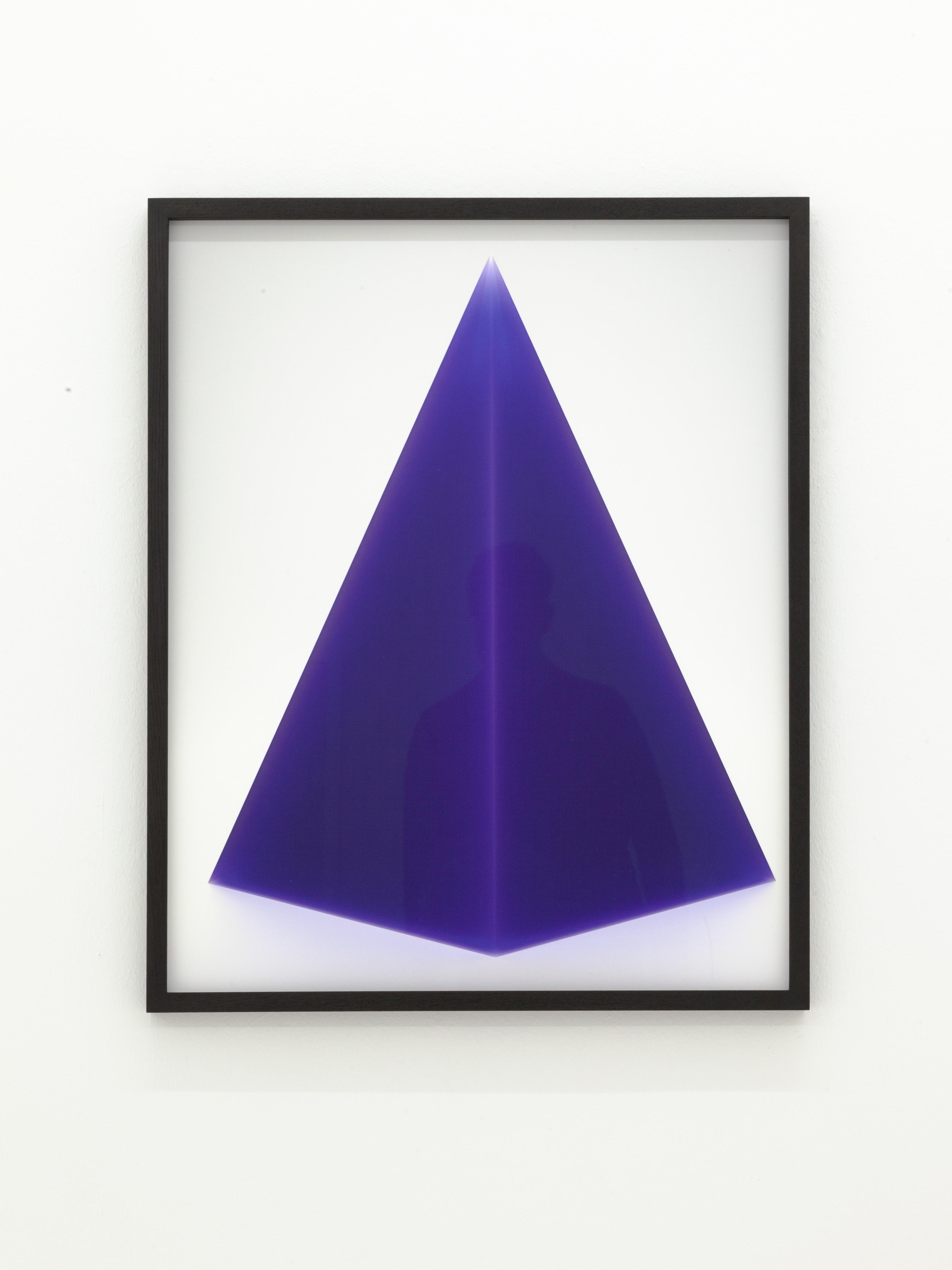 We are happy to invite you to our second solo presentation of artist-duo Banz & Bowinkel:
Cylinder & Bots.

Within their artistic work Giulia Bowinkel (*1983) and Friedemann Banz (*1980) explore the human perception of the digitally augmented real world. Within their generated scenarios, the computer functions both as tool and topic.

The solo exhibition Cylinder & Bots presents the new series Primitives with the augmented works Bots which are being simulated live for the first time. Vinylprints on the floor function as markers on which various constellations of bots, made visible by Banz & Bowinkel’s AR application, perform. Banz & Bowinkel create a structure of meta-rules in which the avatars have to organize themselves, inevitably performing in an equally tragical and comical way since their actions are by no means a result of a free will but a dictation of their creators, the artists.

With this work, Banz & Bowinkel scrutinize human perception of reality, which is informed by an incessant contact with computers and social media and lets humans themselves seem like controlled bots in a semi-virtual world. At the same time they draw focus on the programmers creating those algorithms and thereby significantly setting the movements in cyberspace and eventually in the real world.

Contrasting these works are the iconical Primitives. The primitives, whose components include the platonic solids, function as basic modules in every 3D-program. Within computergraphics one can assemble complicated structures from those elementary one-, two- or three-dimensional geometrical shapes. While Cézanne was trying to visualize the basic geometrical shapes such as cone, cube and cylinder forming landscapes and still lifes, today, those very shapes are basic repertory within common 3D- computer programs for generating digital worlds. At the same time the parametrical primitives, who have not yet been rendered into an output format, show their perfect, mathematically calculated shapes. Similar to Platon’s theory of forms, in which ideas exist as independent entities and are ontologically superior to objects perceptible by the senses, the shapes inside the computer seem to belong to a different dimension one can not fully grasp within reality.
This shows that the computer follows a logic much different to the logic of our real surrounding but the latter is supposed to be administered mainly by computers.
Banz & Bowinkel draw focus on the iconical aspect of the Primitives and at the same time break with their mathematical perfection by making the archetype the image. The question is unresolved as to what extend the computer can manifest itself creatively if it is actually trapped inside the realm of the ideal.