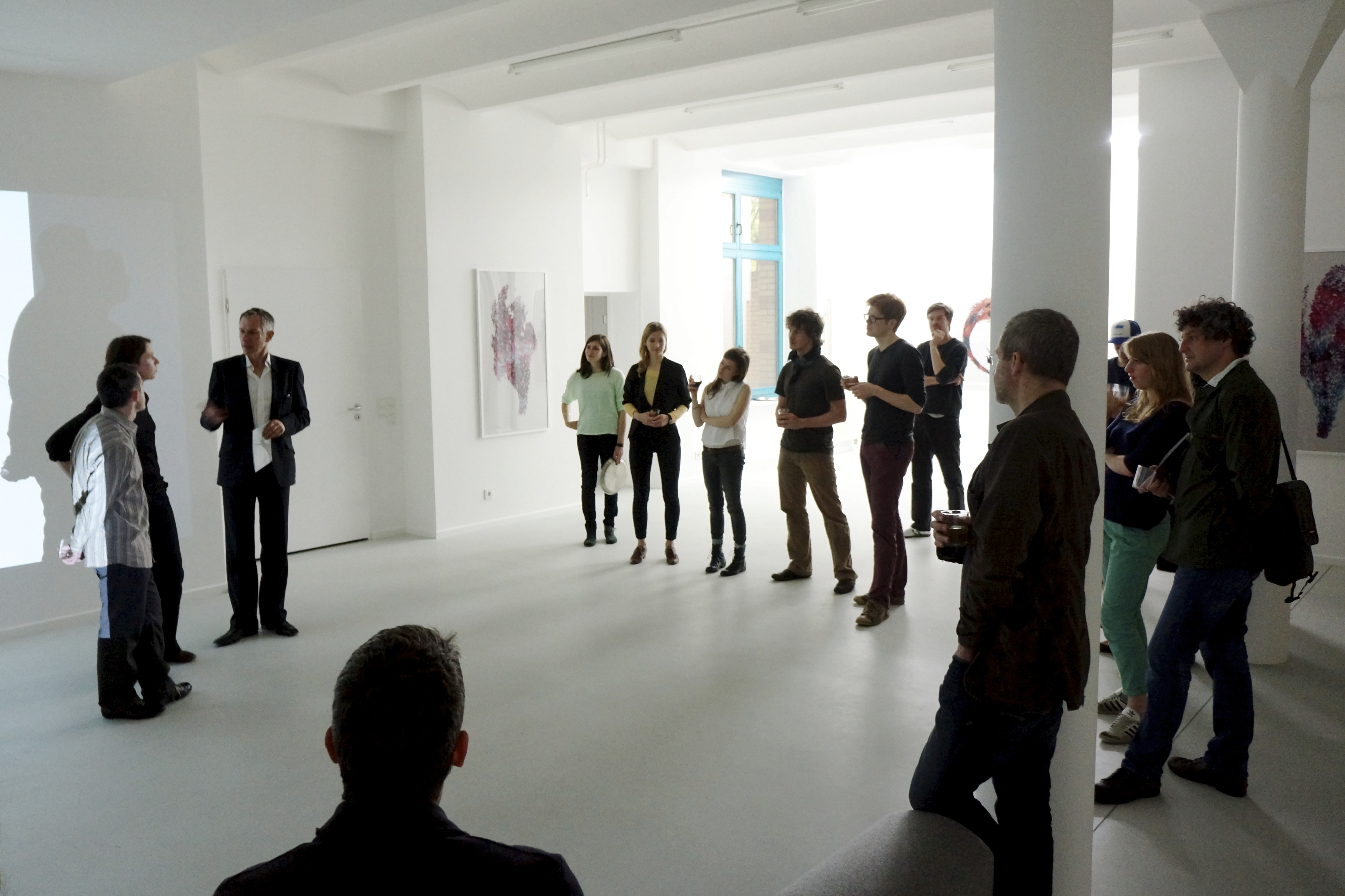 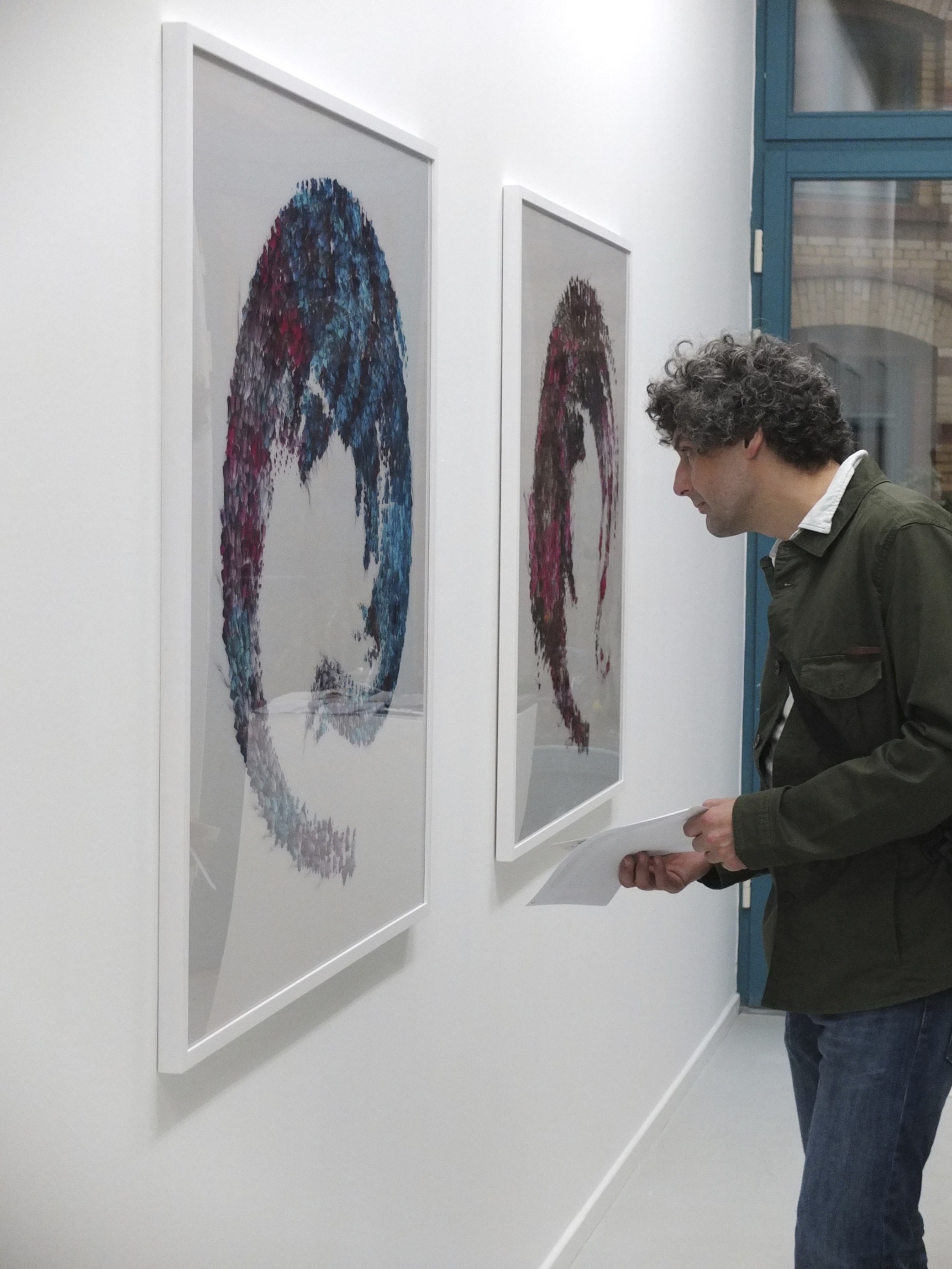 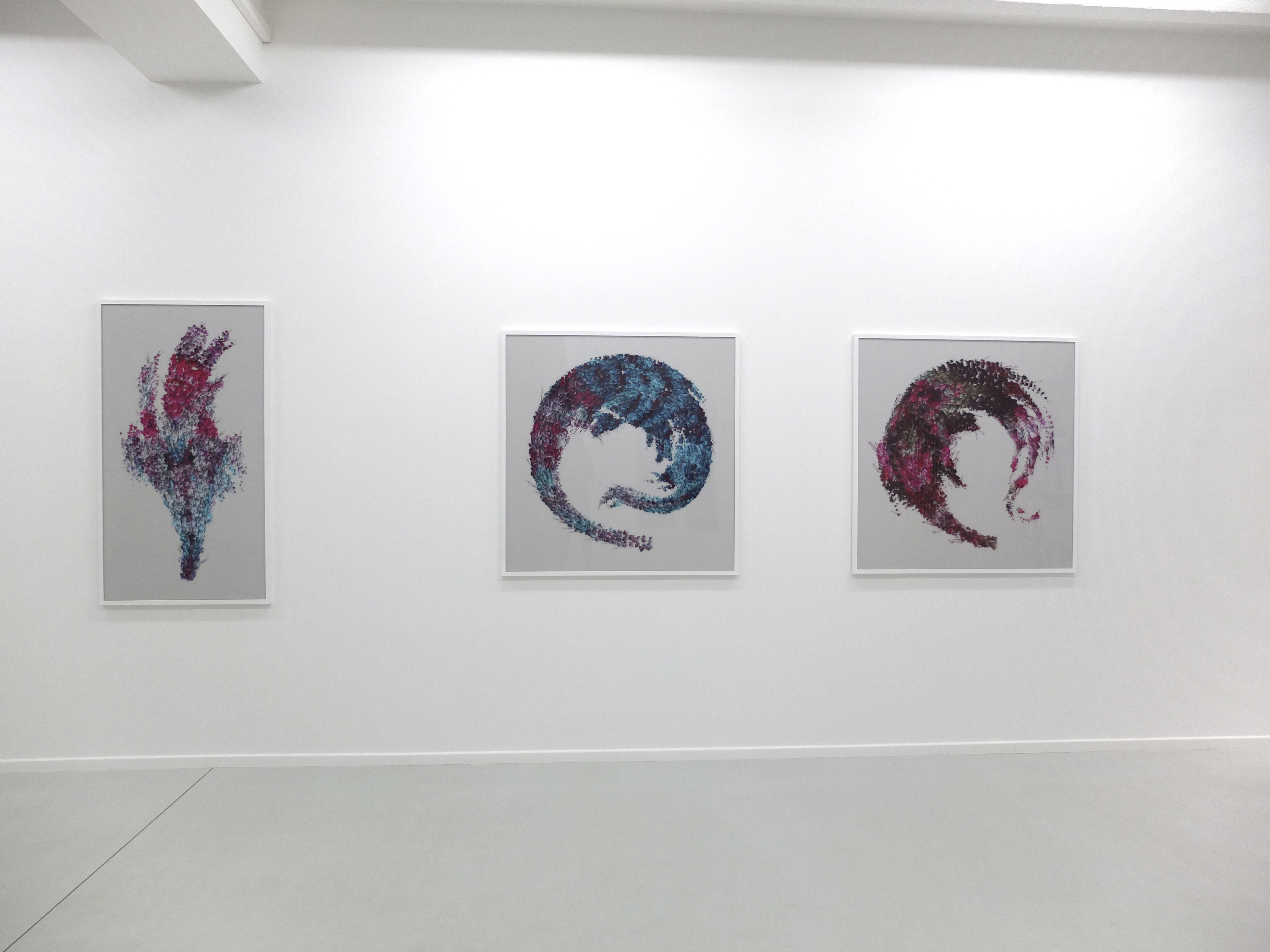 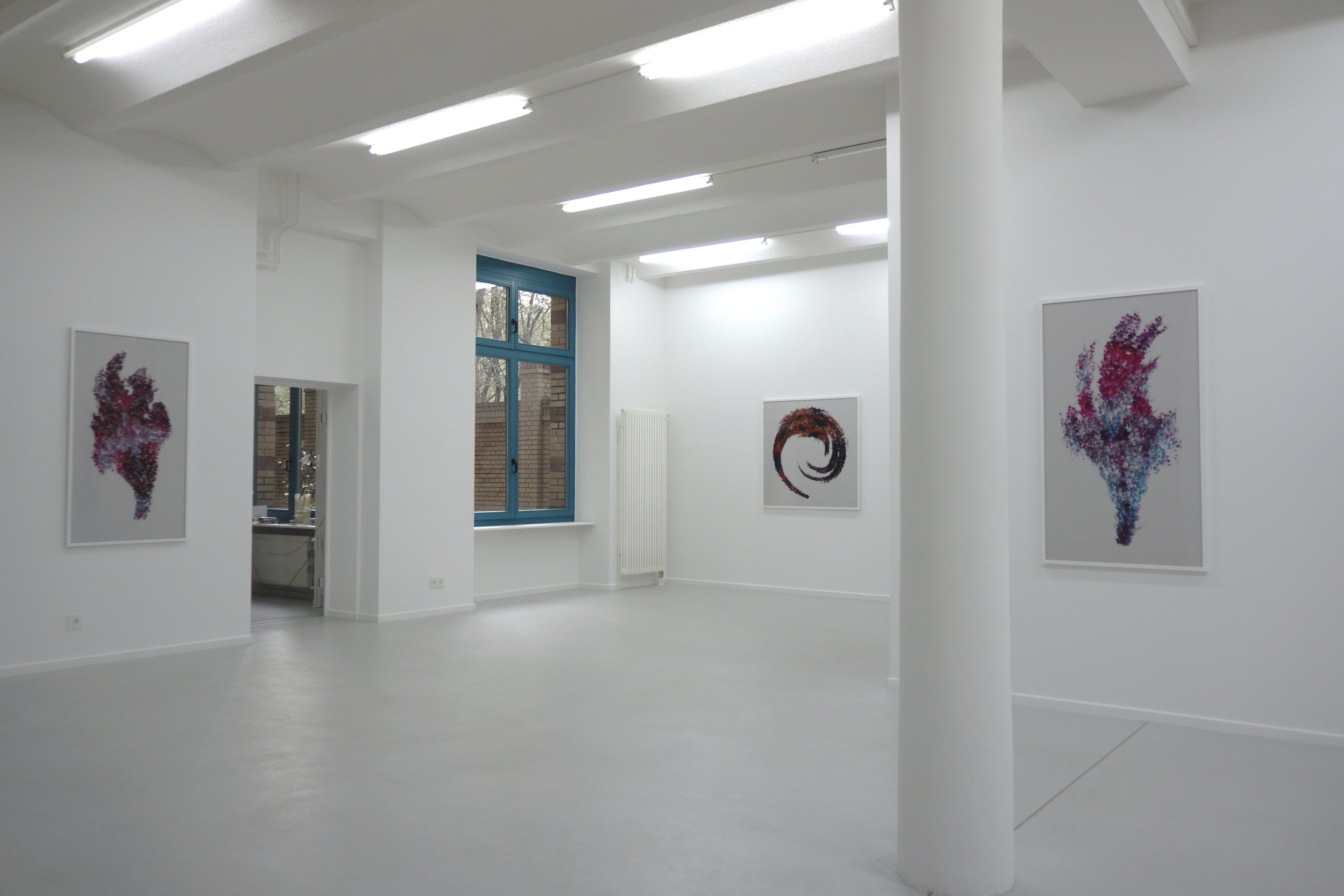 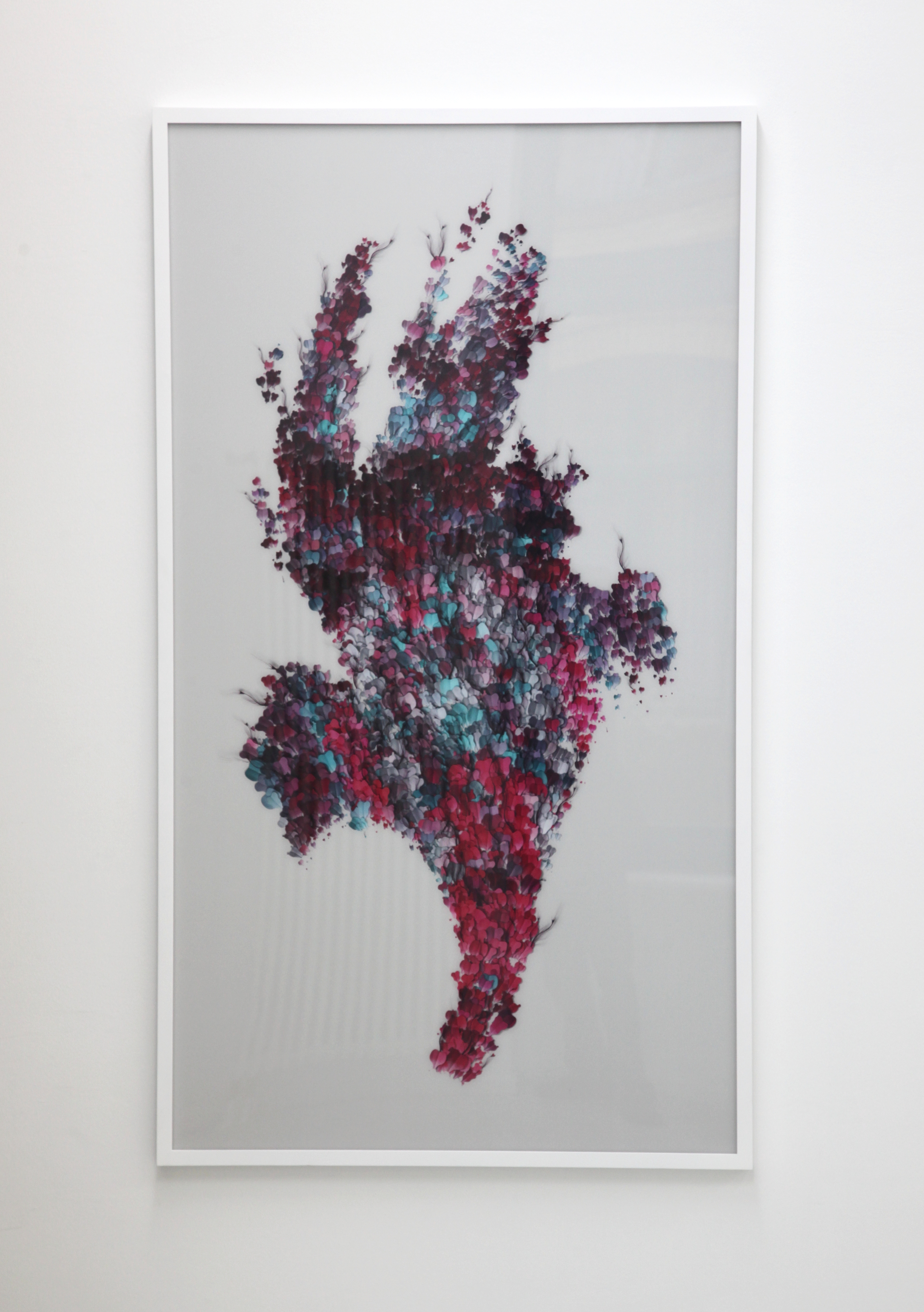 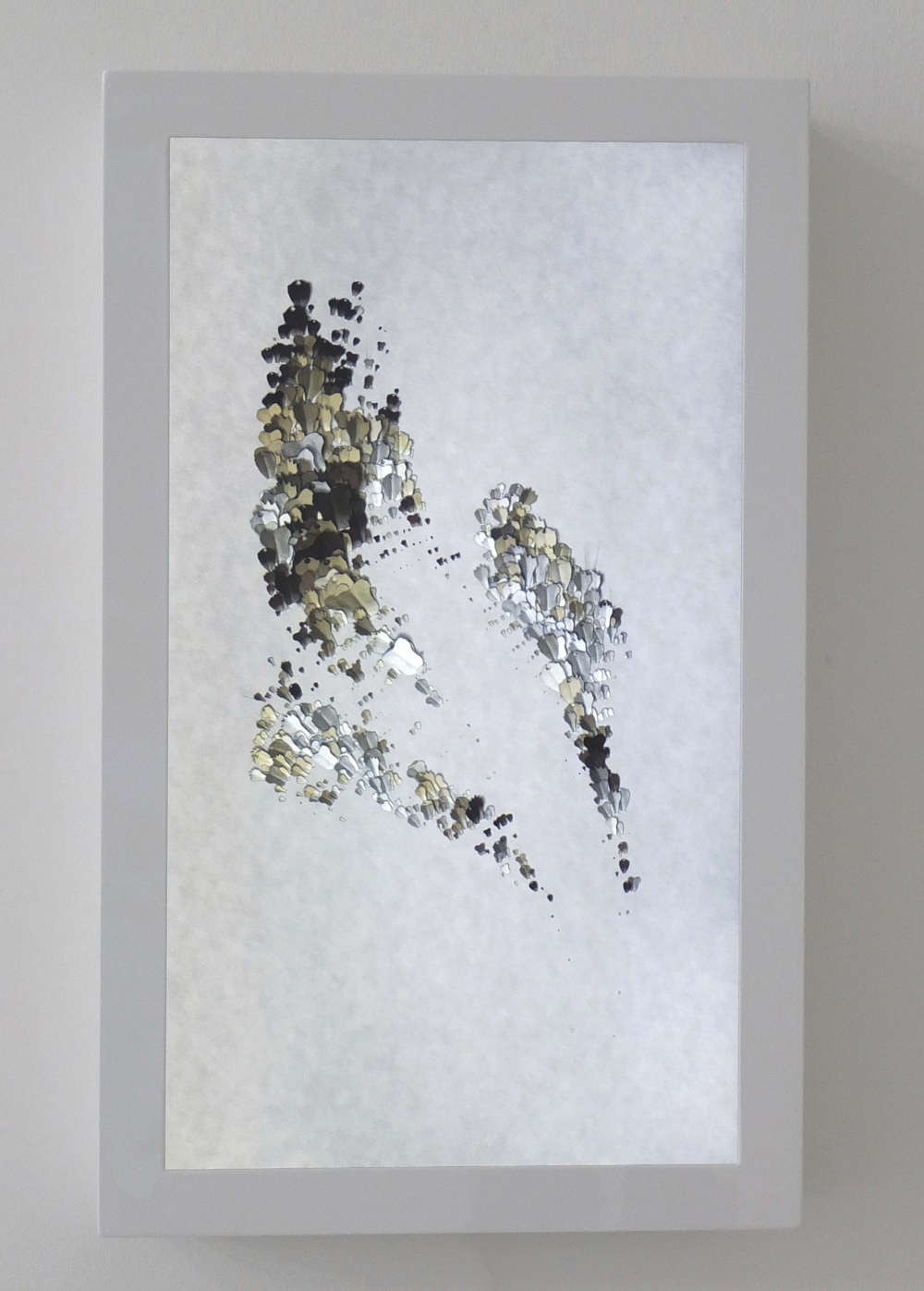 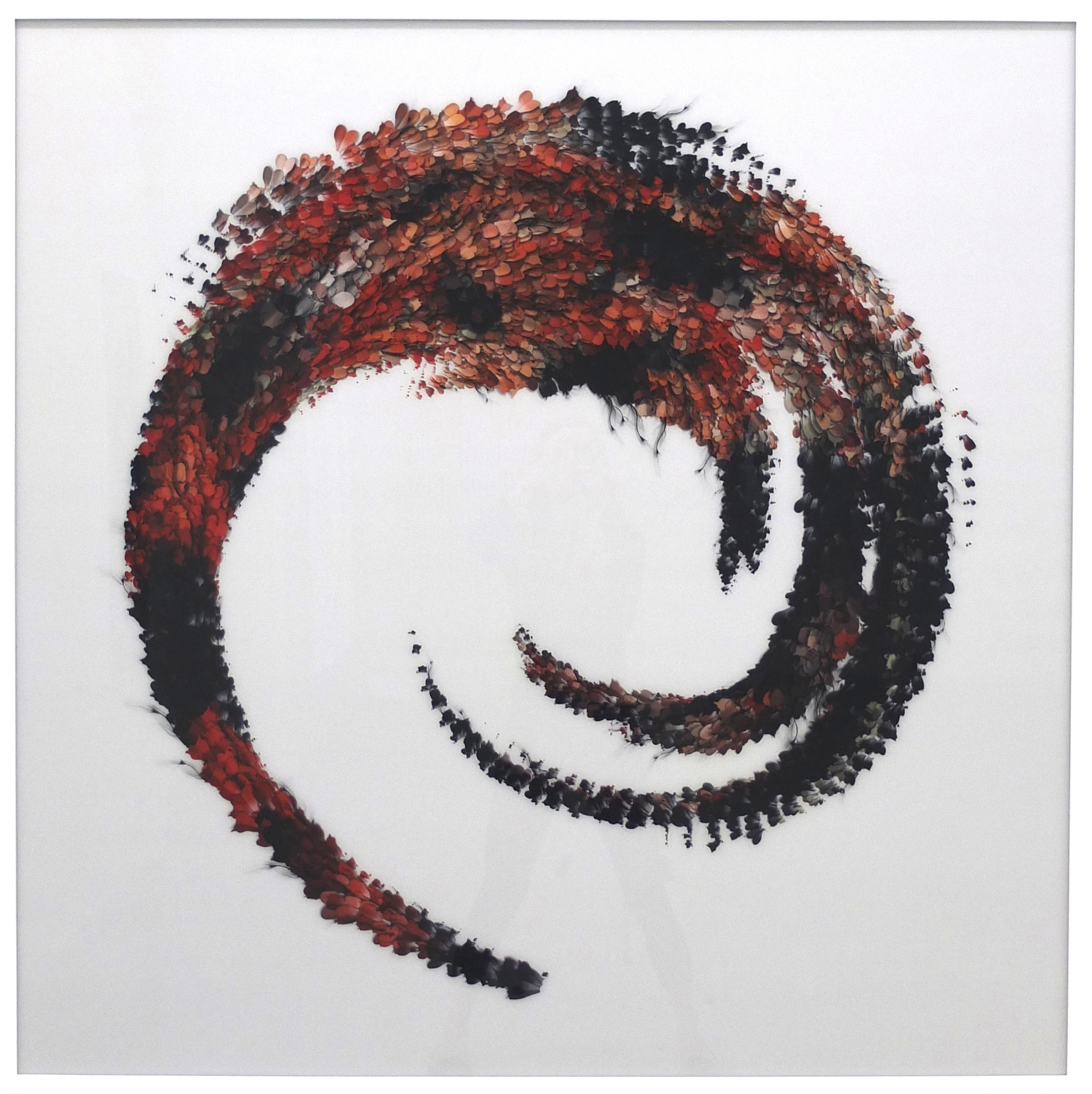 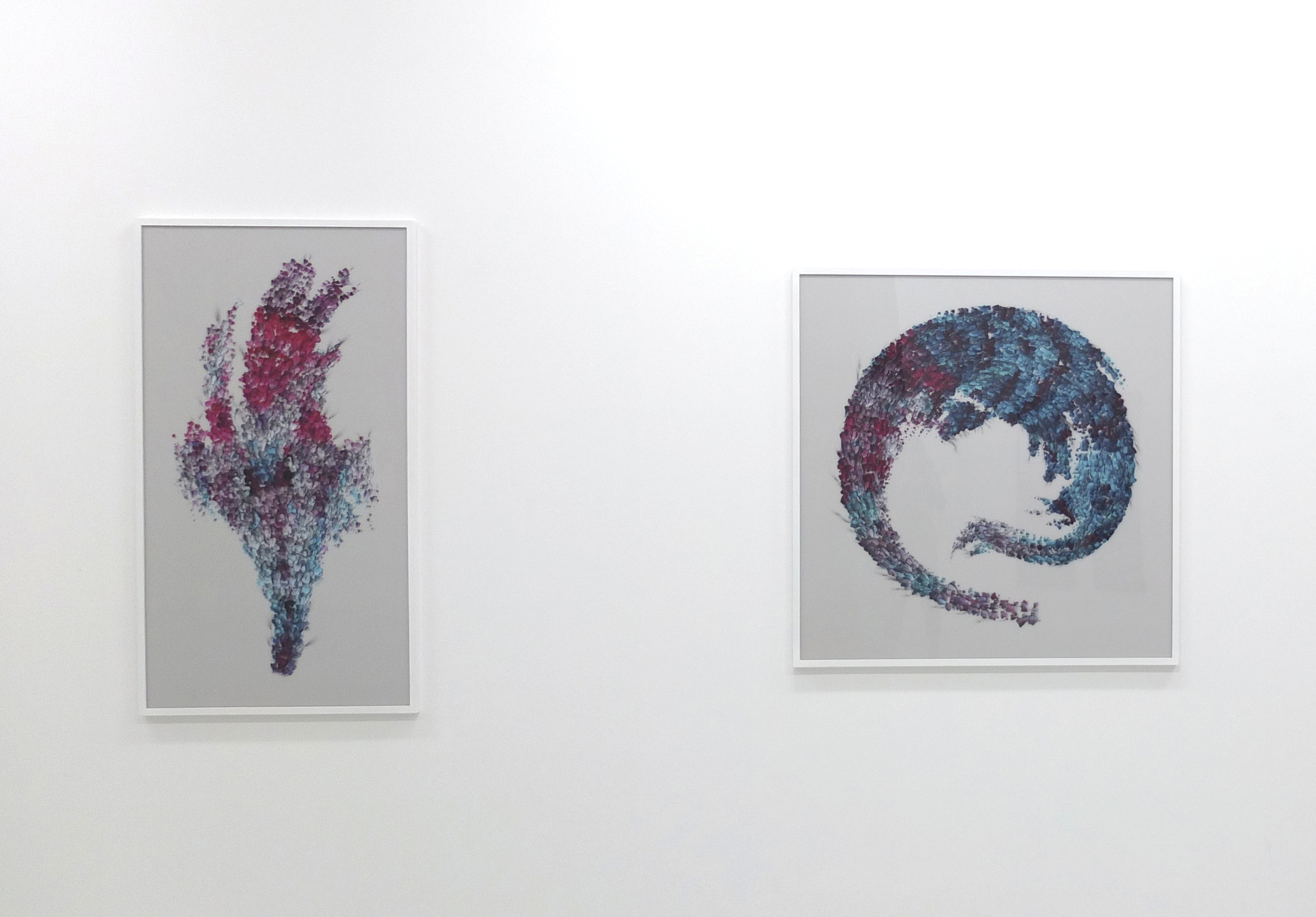 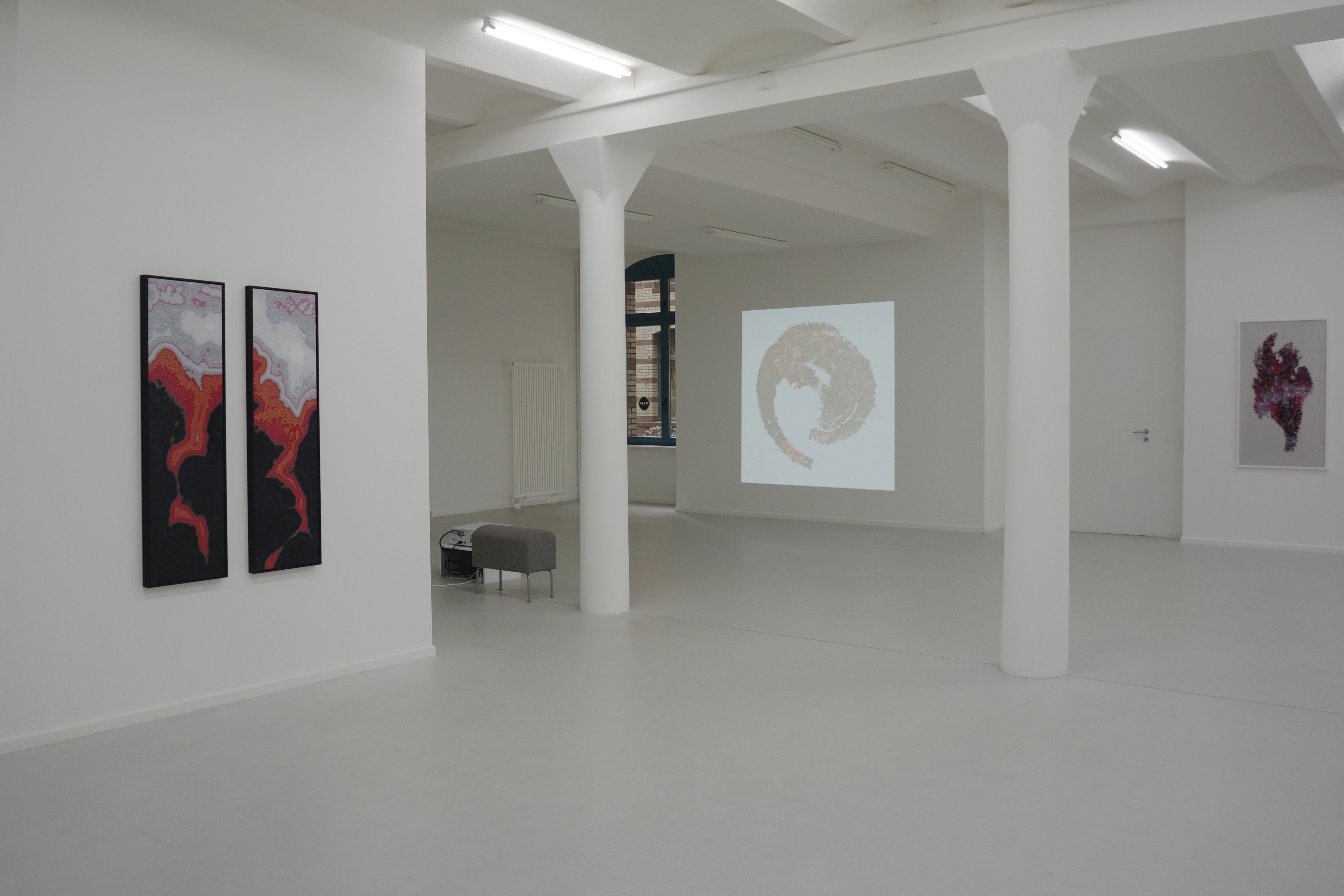 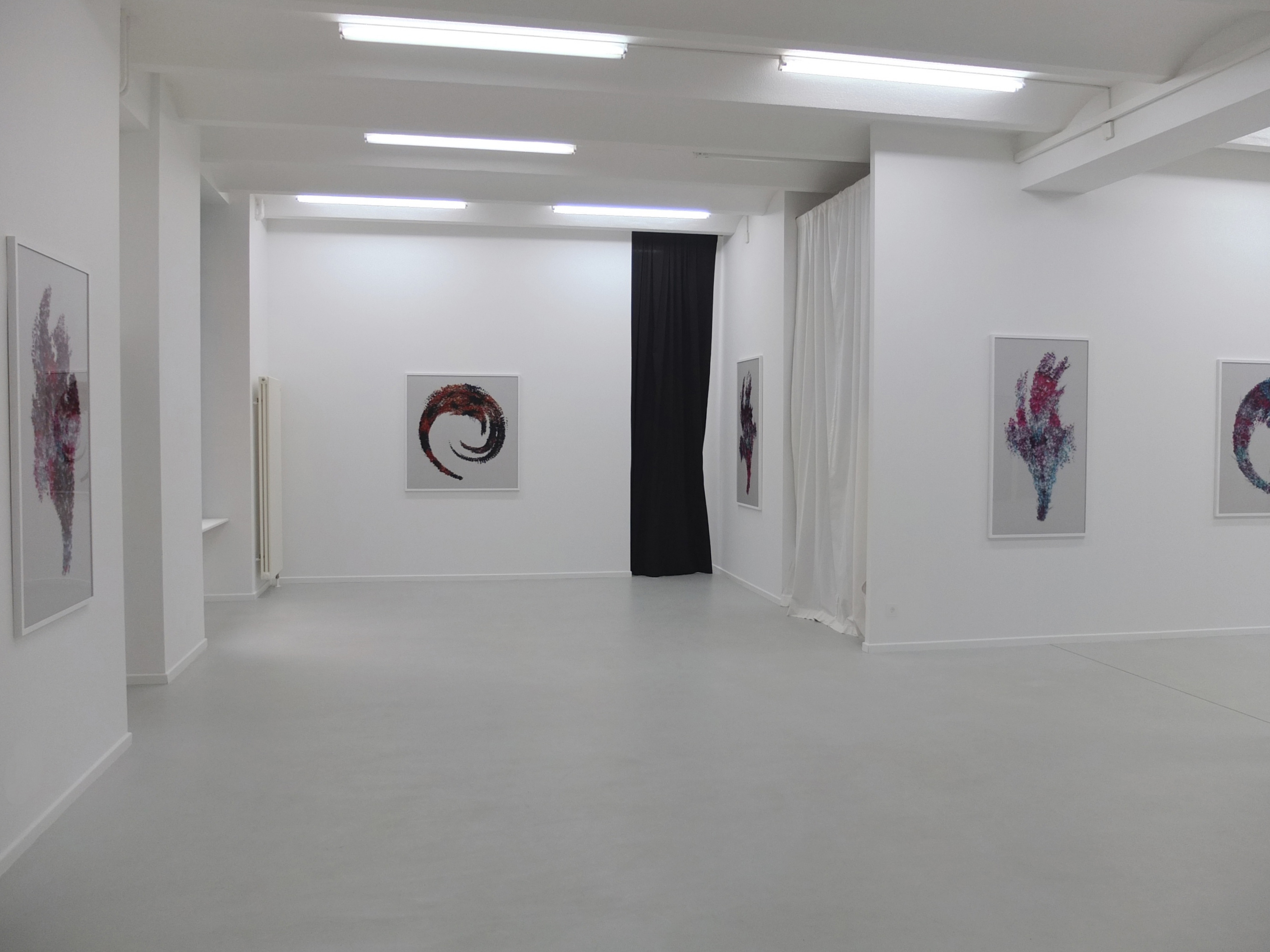 boredomresearch are greatly inspired by the diversity that exists in nature. Using computational technology they explore a similar diversity, simulating natural patterns, behaviours and intricate forms that gradually change over time. The works in the “Fragments” exhibition looks at these forms up close, transforming evanescent detail into bold compositions. boredomresearch have developed this work using a range of techniques including generative software, 3D and computer modelling to create re-imagine forms and compositions.

Exploring the mechanisms of pattern formation in boredomresearchs’ new computational artworks and prints you can observe the intricate beauty of these detailed surfaces. The vibrant circles of the “Black Mountain” (2013) prints, fuse together, forming landscapes suggestive of deep mountain crevices. In the computational work “Fragments of Lost Flight” (2012-13) autonomous agents paint virtual pheromone trails to generate an ever-changing procession of scaled wing fragments. These scaled forms, evocative of Lepidoptera, also exhibit floral like qualities. The structures form in real time with a visual quality reminiscent of botanical illustrations in watercolour. Thus bringing together the act of illustration with the process of simulation – exploring how recursive technologies allow for a reinterpretation of traditional forms of artistic practice.

In nature the process that leads to familiar forms such as butterfly wings are exposed to intense selective pressure with only those of value for survival remaining, in contrast, the generative artworks within the Fragments exhibition treats all possibilities equally. Generating form after form, the endless exploration of diversity is punctuated by exceptional instances, that once gone will never be revisited. boredomresearch have developed this generative software to capture some of these striking forms, rendering them at large scale, in the “Lost Flight Fragment” (2013) and “Lost Flight Plume” (2013) prints. Each image presents a vibrant, intricately scaled surface alluding to a fragment from an unknown imagined organism. By refusing any indexical links to nature, the works within the Fragments exhibition confound our existing taxonomy – creating renderings that are poetic and suggestive.

boredomresearch is a collaboration between Southampton UK based artists Vicky Isley (b.1974) and Paul Smith (b.1975). All their artwork is computer-generated and includes interactive online projects, generative objects and prints. Their work is in the British Council’s Collection and has been awarded honorary mentions in Transmediale.05, Berlin (2005) and VIDA 7.0 Art & Artificial Life International Competition, Madrid (2004). boredomresearch’s artworks have been exhibited worldwide including House of Electronic Arts in Basel (2012); KUMU Art Museum in Tallinn, Estonia (2011); Today Art Museum in Beijing (2010); LABoral Centro de Arte y Creacion Industrial in Gijón, Spain (2010); STRP Festival in Eindhoven, Netherlands (2009); Instituto Itaú Cultural in São Paulo (2008) among many other venues.