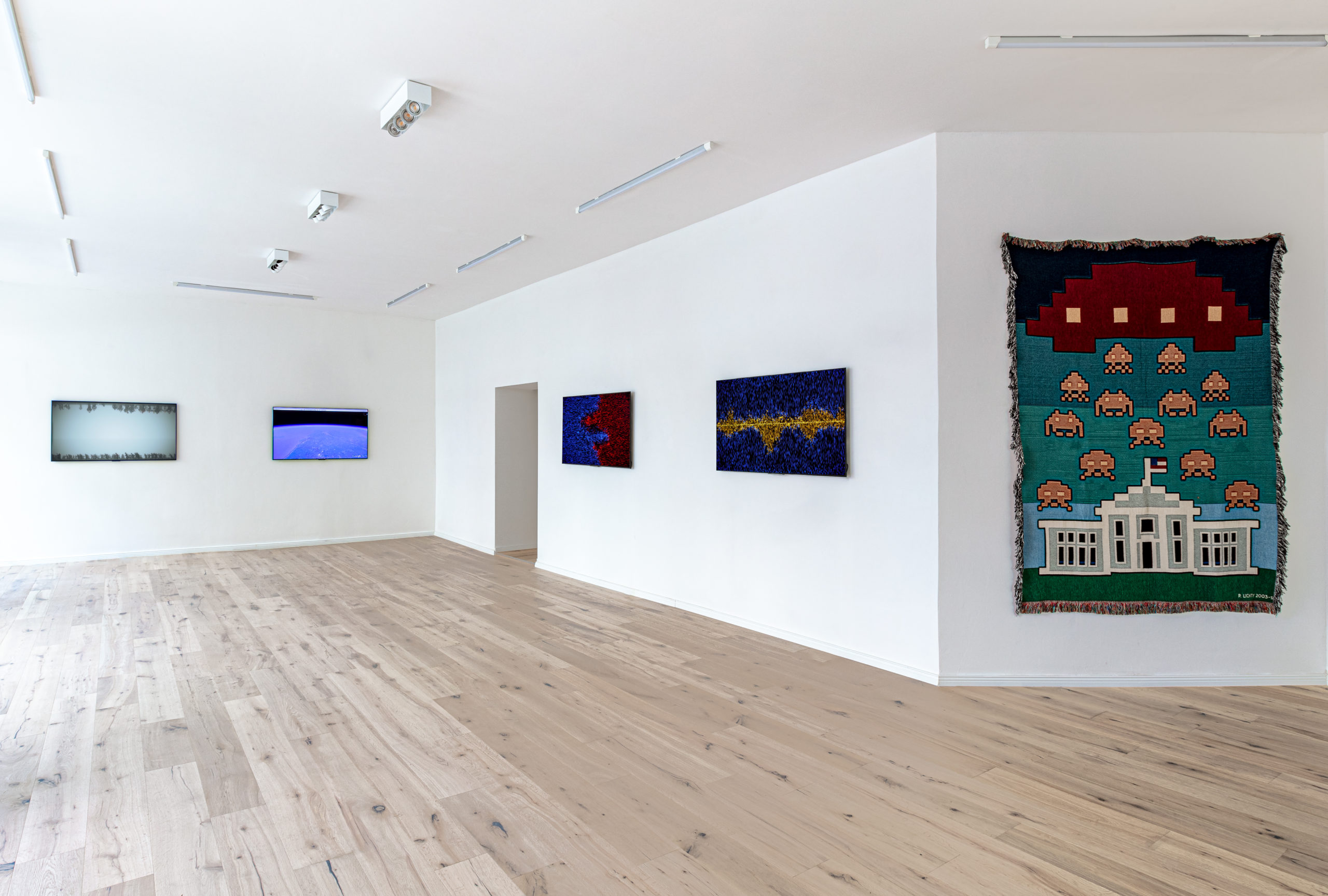 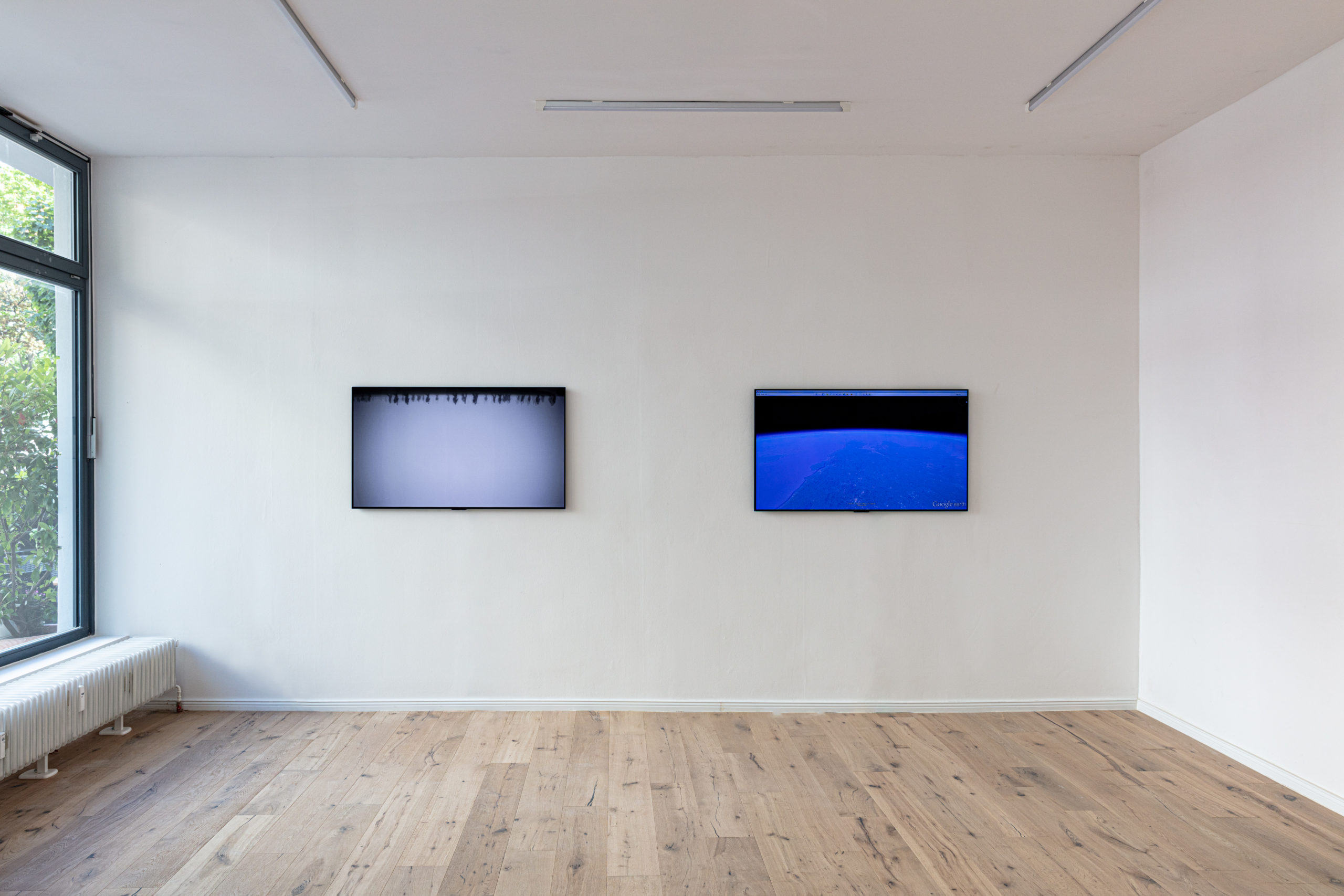 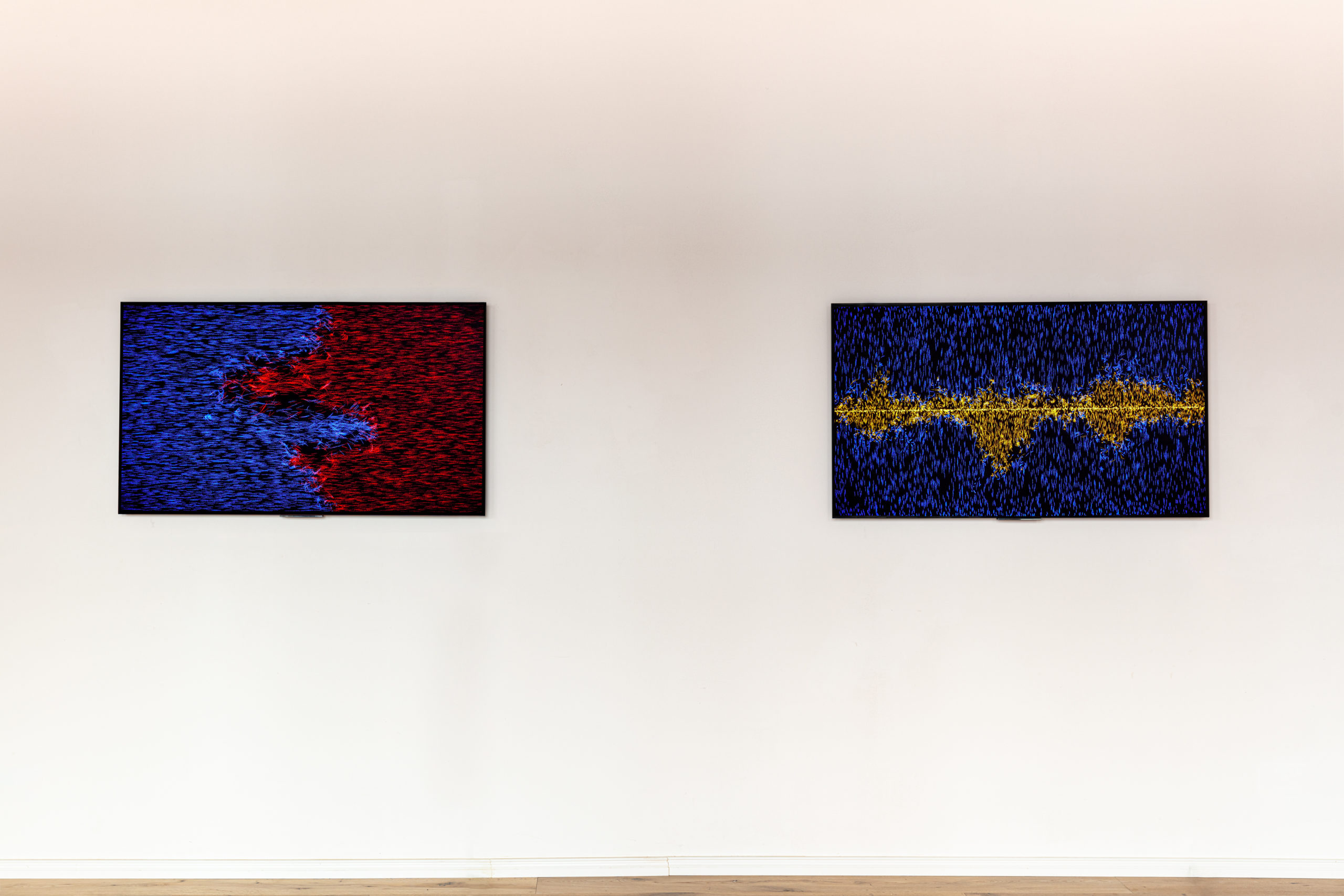 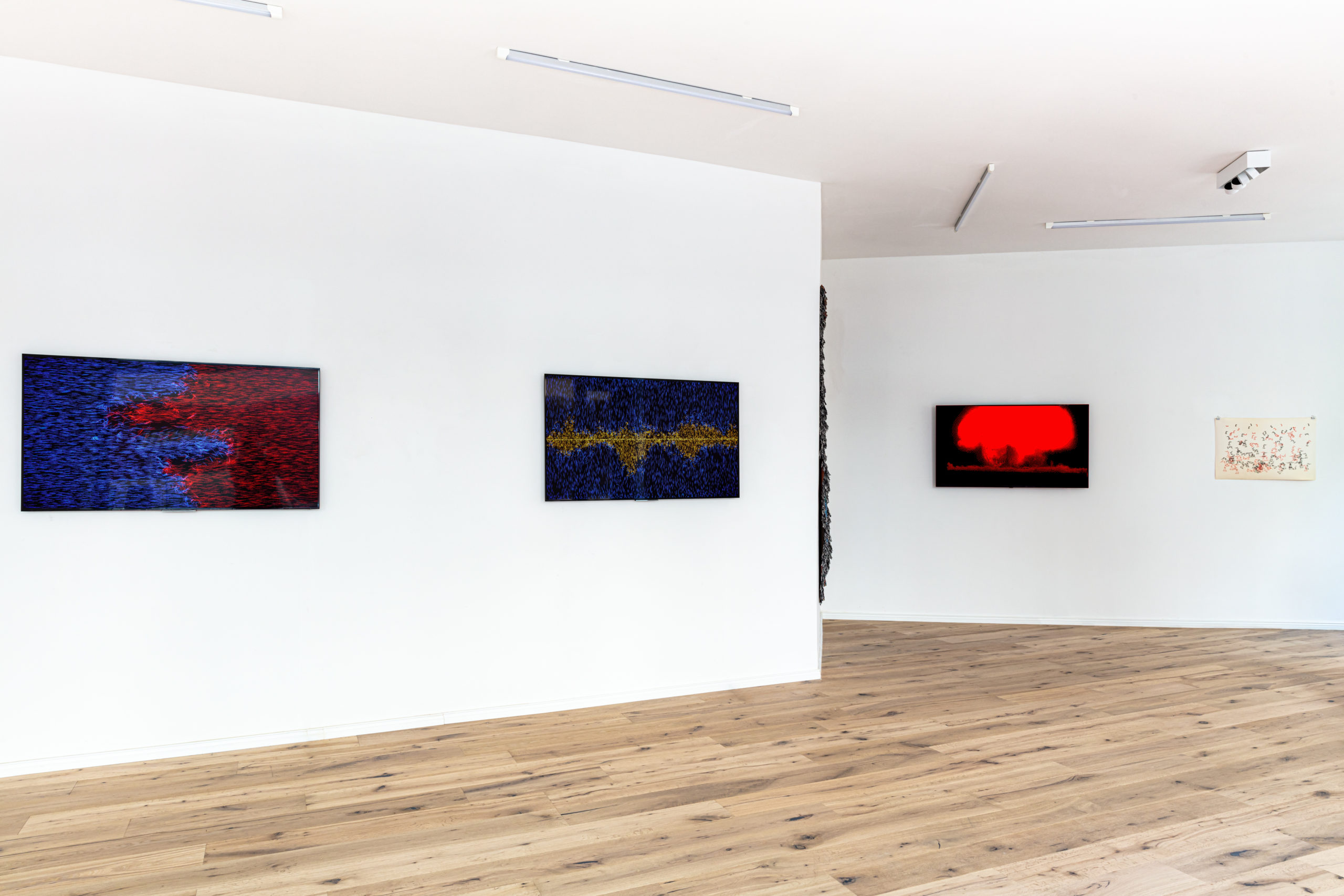 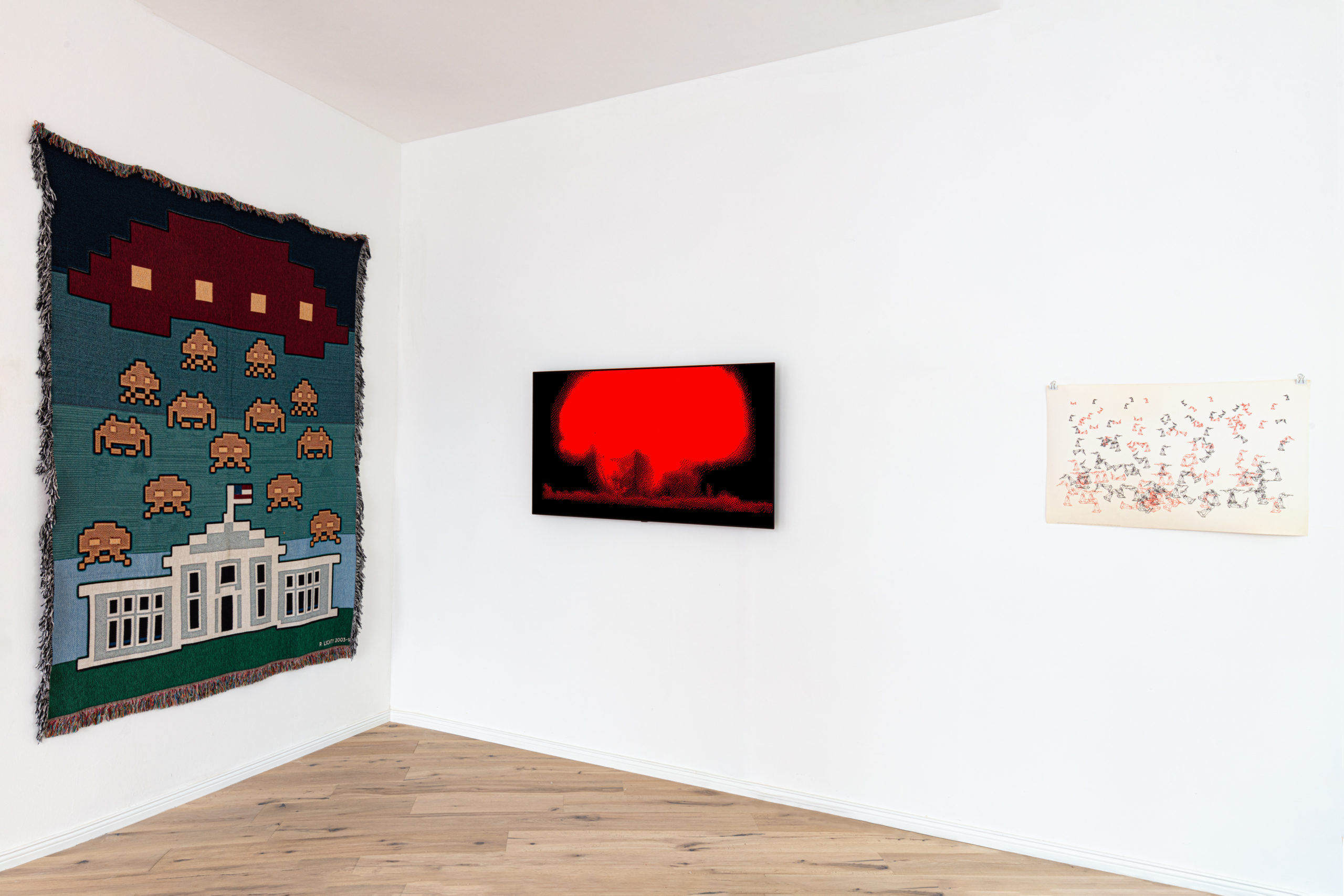 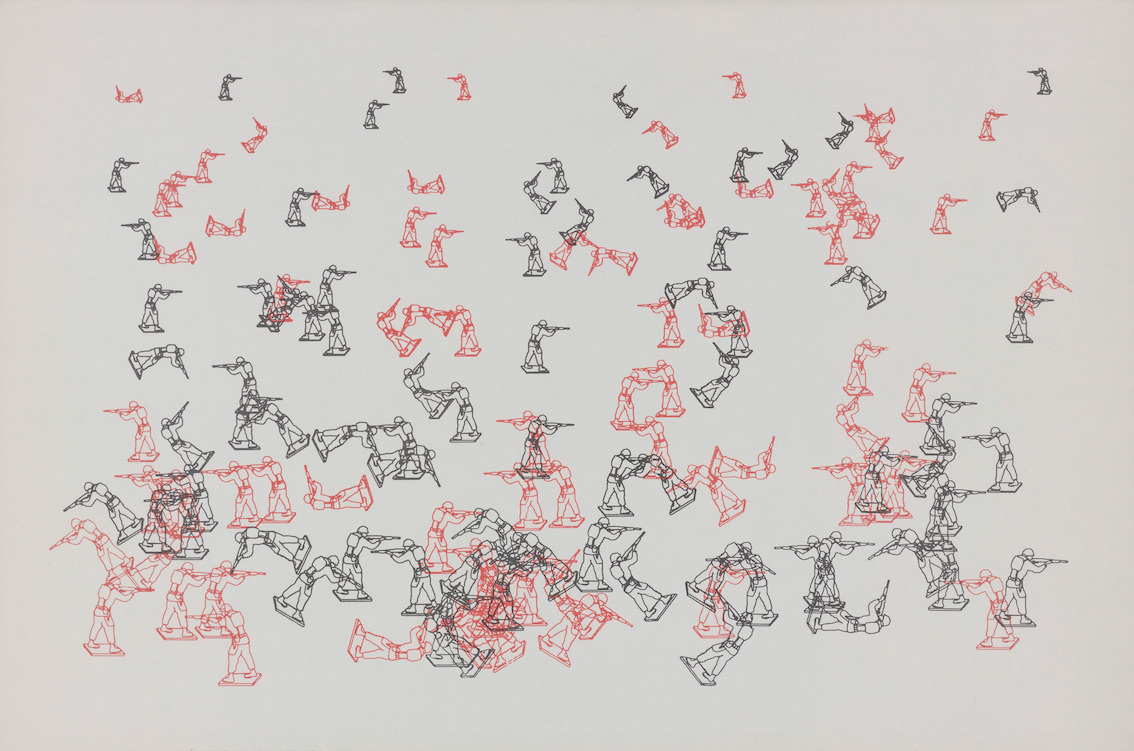 In the group exhibition “RAWWAR”, DAM Projects approaches the currently omnipresent topic of war. The six artistic positions deal with this topic on a superordinate level. With their general validity beyond time and place, they are intended, on the one hand, to create a certain distance to the current and very close events in Ukraine. On the other hand, however, it is precisely by their meta perspective that they open up new aspects for the discussion about this specific war.

The installation artist, programmer and theorist Antoine Schmitt (FR) deals with processes of movement and analyses them in spatial, social and philosophical terms. In the exhibition, he shows two generative software works from the series “War” (2015), which simulate war dynamics. Inexhaustible armies of programmed pixels clash like soldiers on the battlefield, fighting and displacing, surrounding, attacking and eliminating each other, being endlessly replaced.

Patrick Lichty (US) is a media artist, curator and author. He works with various classic and newer media such as video, graphics, digital tapestry, virtual reality, augmented reality and artificial intelligence. One  characteristic of his approach is the bridging of the analogue and the digital, of handcraft and software calculation, of materiality and immateriality. His tapestry exhibited here shows the large-pixelated “Space Invaders” from the video game of the same name, one of the first gaming world hits from 1978, attacking the White House. Beneath this friendly and playful surface lies the dead serious questioning of the reasonableness of wars.

Charles Csuri (US), pioneer of computer art and a World War veteran, who died only a few weeks ago aged 99, is represented in “RAWWAR” with the iconographic lithograph “Random War” (1967-1968). It is the result of a software work that was first shown in 1968 in “Cybernetic Serendipity” at the ICA London, one of the first major exhibitions of digital art. The work is considered a trailblazer for the computer game. Scattered on the white sheet are red and black outline figures of soldiers with their rifles at the ready. The image information is fed from a computer-generated list of soldiers’ names, in which software randomly decides who is killed, injured, missing or commended. . Created at the height of the Vietnam War, this work is a factual and accurate commentary on the objectification and dehumanisation of soldiers on the playing field of war.

Casey Reas (US) is a media artist, software developer and professor. He primarily creates software-generated art that is manifested dynamically as moving images or statically as a graphic. In recent years, he has often taken the opposite approach, reducing existing image material instead of constructing it from scratch. In the case of his video work “Operation Teapot”, he uses historical television images of atomic bomb explosions that are highly simplified but still clearly recognisable as such. It is not only the high degree of figurativeness that is unusual for Casey Reas, making this work stand out from his oeuvre. It also displays a personal reference to the artist that is otherwise not as pronounced.

Joan Leandre (ES) mainly works with computer games, which he deconstructs by software modification and reassembles in own narratives. In each case, he focuses on certain elements typical of games such as flight simulation, jungle landscapes and warlike actions. The series “In the Name of Kernel” (2019) outlines a narrative of war, a recurrent element of computer games, acute and confrontational as the central action or subliminal as a latent threat in the background. Dream-like fractured and layered set pieces of imagery are complemented by an ambient sound design that adds a strangely aesthetic and intriguing tone to the unsettling, apocalyptic atmosphere.

DISNOVATION.IRG (FR) is an international collective of media artists. The group sees itself as a critical force at the intersection of art, science and hacking. In the video work “War Zone” (2013-2014), they used Google Earth to retrace launches and trajectories of war missiles from different eras and conflicts around the world. However, one sees nothing of the missile itself or its impact. This enables both a clear recognition of the situation and an inner distancing from the process.