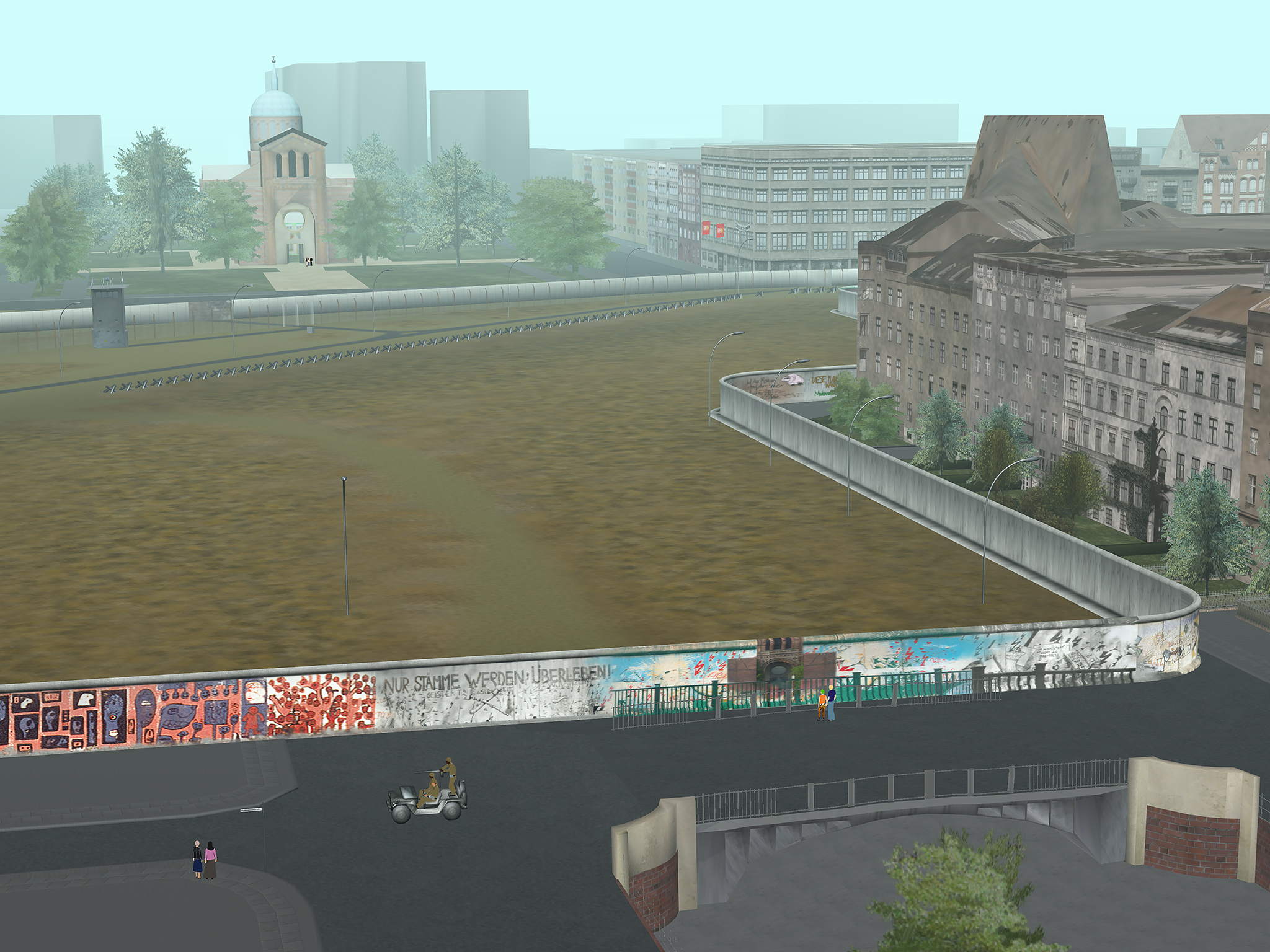 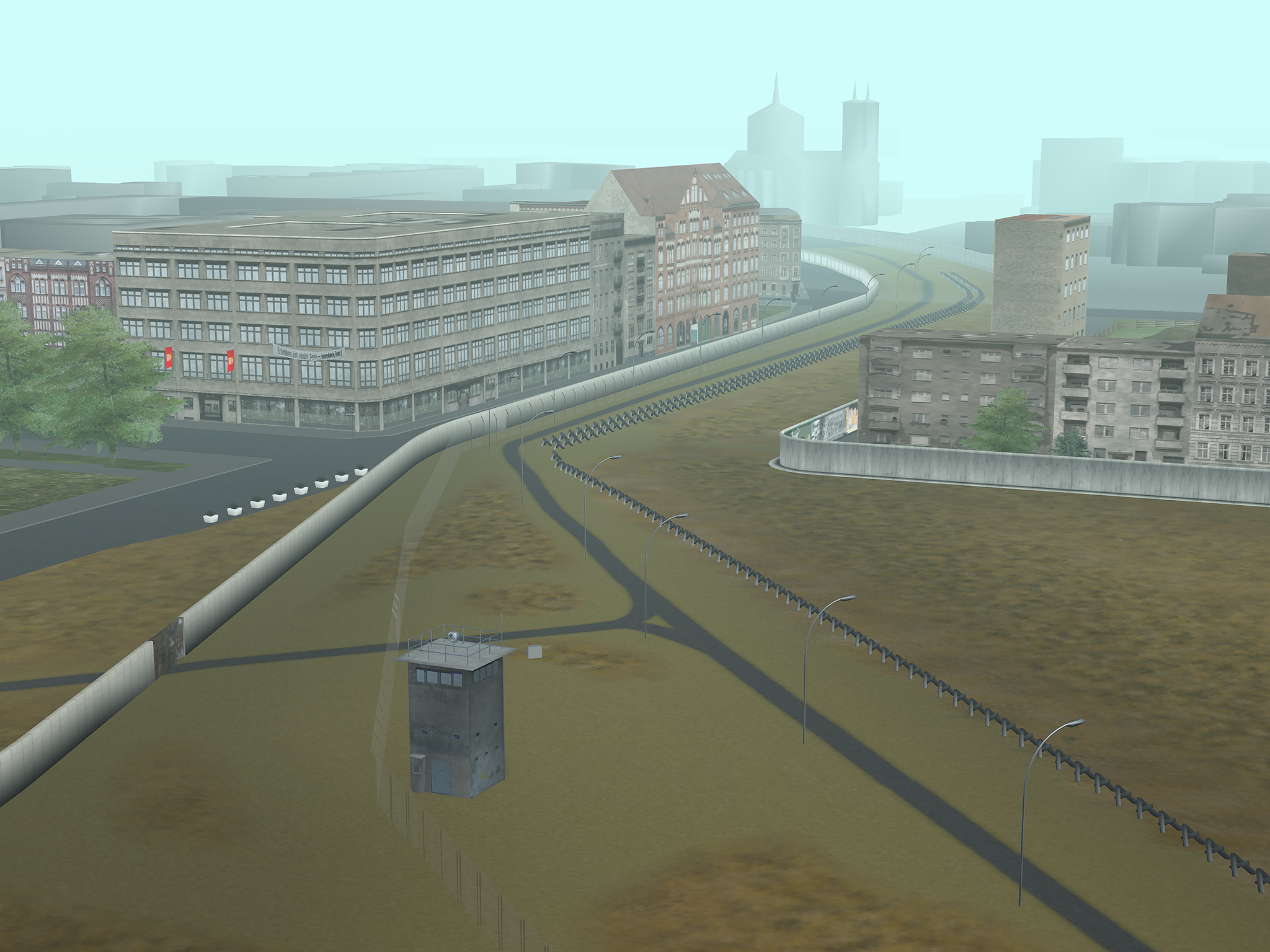 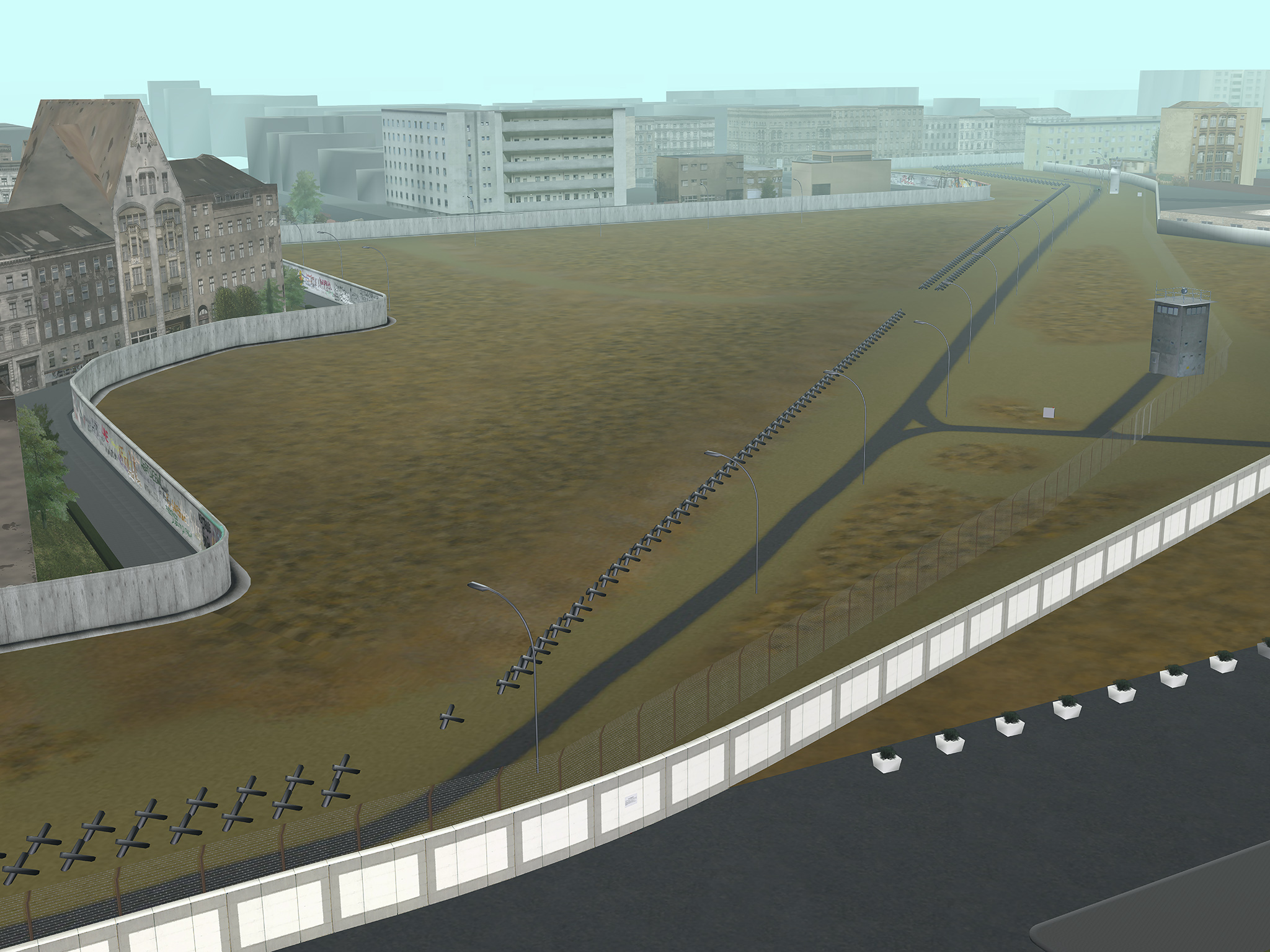 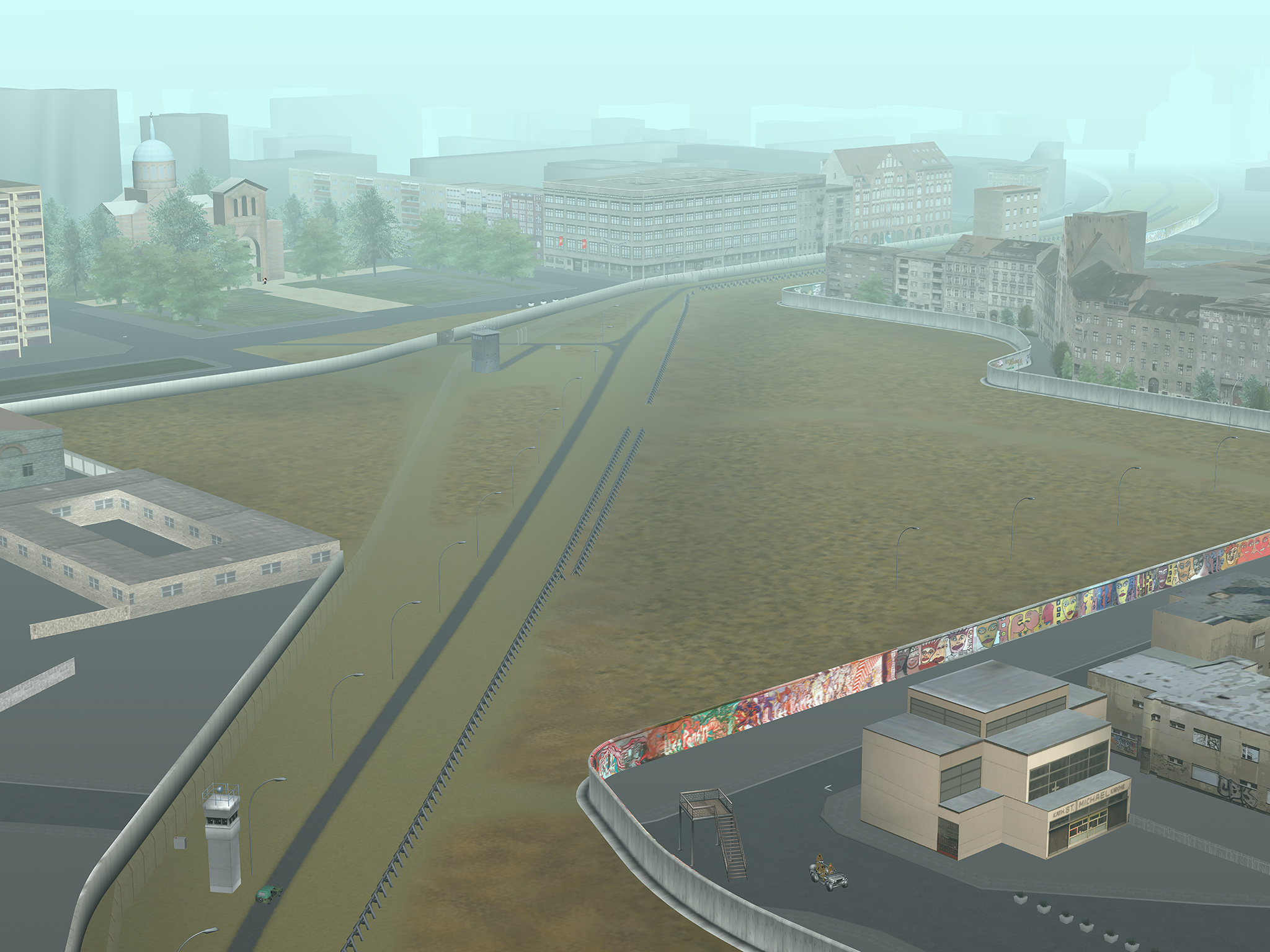 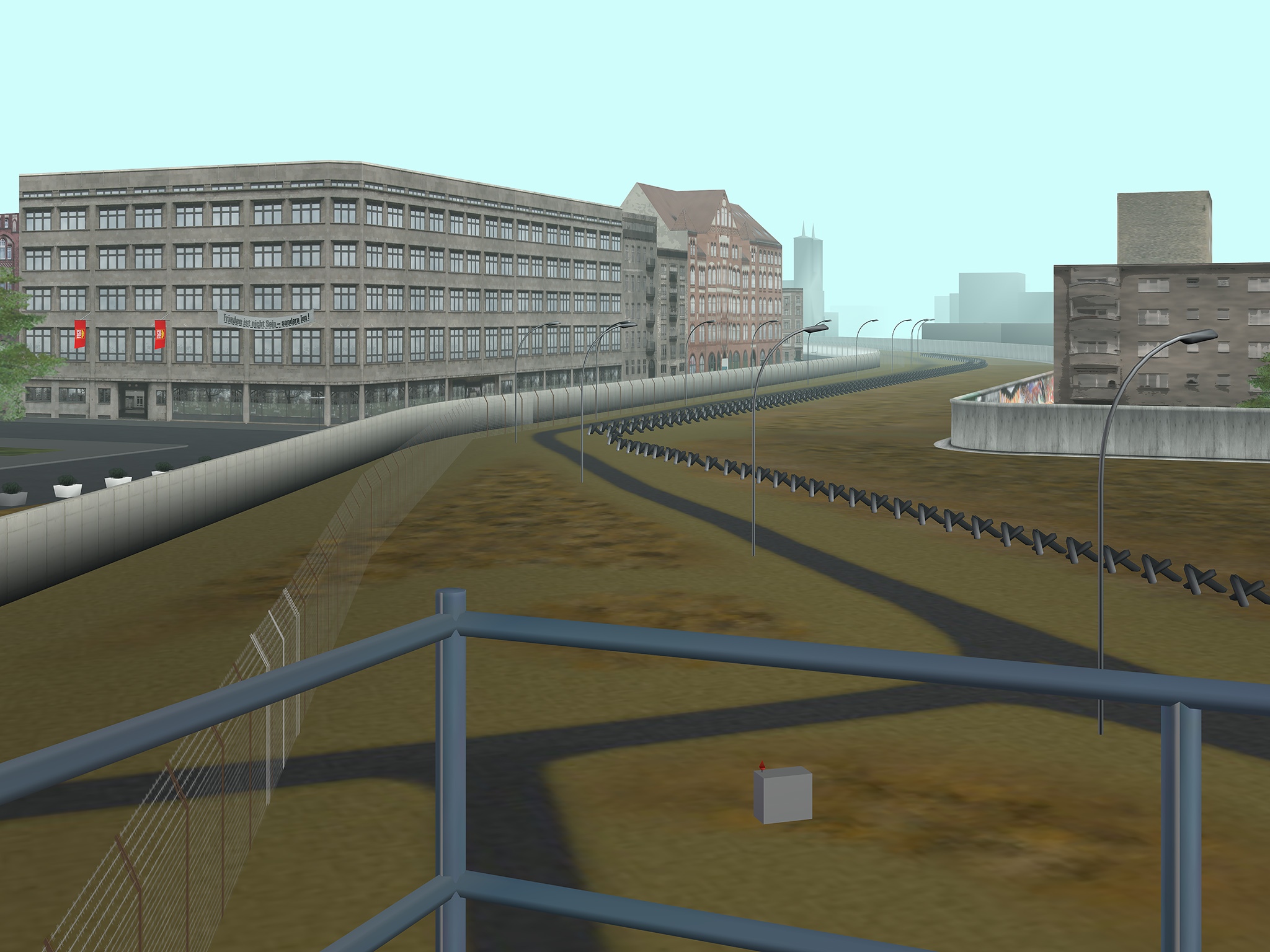 We are happy to invite you to the exhibition of T + T’s VR-work “Virtuelle Mauer/ReConstructing the Wall” from 2008.

We already exhibited this VR installation in 2009 in our gallery on Tucholskystrasse. Now you have the opportunity to take a look out the windows of Taut House and compare today’s reality with the historical situation before the fall of the Berlin Wall.

The new edition of images relating to this place will be shown for the first time.

“The Berlin Wall separated West Berlin from East Berlin from 1961 – 1989. As part of the “inner German border” it was a symbol of the Cold War and the division of large parts of the world into two opposing political systems. By now, most traces of the Berlin Wall have been eliminated. For those who did not experience the Wall themselves, the effects of this structure on Berlin’s urban space, and on the political and sociological divisions engendered by this “Wall in people heads,” are not comprehensible today.

In 2008 the artist team T+T (Tamiko Thiel and Teresa Reuter) brought out their VR artwork “Virtuelle Mauer/ReConstructing the Wall” to provide an interactive 3D encounter with a 1 kilometer long section of the Berlin Wall and its adjacent neighborhoods. This work creates a space of memory in which users can  experience the physical, political and social effects of life “in the shadow of the Wall.”

A central part of the artwork’s project area is the Engelbecken on Michaelkirchplatz. During the time of the Wall it was filled in to form part of the Death Strip between the East Wall and the West Wall, but has been restored to its former function as a park with water basin. The images in this series are renderings from „Virtuelle Mauer/ReConstructing the Wall“ showing views of the Engelbecken that are not seen in the VR artwork itself.” (Tamiko Thiel, 2021)